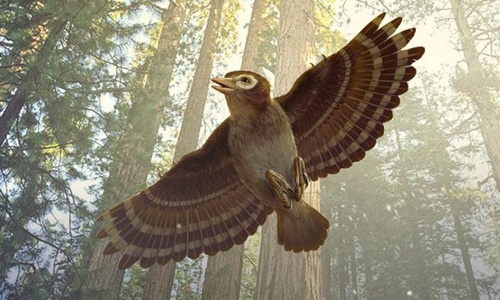 An international team led by a Chinese paleontologist in Myanmar discovers a large ancient bird dating back to the Cretaceous period, preserved in amber. (Photo: Courtesy of Xing Lida)

Beijing plans to establish punishments for the destruction of ecological conservation zones by area, with a maximum penalty of 5,000 yuan ($733) per square meter, which experts said is a strict and practical regulation that could set an example and be promoted in more parts of China.

The capital on Wednesday held the 24th meeting of the Standing Committee of the 15th Beijing Municipal People's Congress and deliberated on the Draft Regulation on the Ecological Protection and Green Development in Beijing's Ecological Conservation Areas.

The draft requests that measures be taken to protect the ecological environment when developing land and mineral resources in ecological conservation areas, and ecological restoration should be carried out in a timely manner if damage is caused, with violators facing fines if they fail to do so.

The draft said punishments will be carried out according to "square meters," and a fine of more than 2,000 yuan and less than 5,000 yuan will be imposed per square meter.

Some insiders said this kind of punishment was rare in previous laws and regulations related to ecological preservation, and not only acts as a deterrent, but is also practical.

Sun Zhicheng, senior engineer of the Gansu Dunhuang Xihu National Nature Preserve, told the Global Times on Thursday that it is necessary to expand this measure to more parts of the country to better protect specific regions including urban public green spaces, water area in parks, neighborhoods, scenic spots, and protected areas for rare and endangered species.

For urban public green spaces, water areas and other small places, this kind of strict punishment is particularly operable, as destruction sometimes does not occur in large areas, Sun noted.

He said some forestry laws also have similar clauses, but normally regulate punishments by the square kilometer.

In addition to fines, violators will be requested to restore the area's original appearance, such as reseeding and replanting in damaged forests and green spaces, Sun said.

The Beijing Municipal Commission of Development and Reform published a notice soliciting public opinion of the draft on July 21.

According to the draft, Beijing will implement a system of paid use of natural resource assets, gradually establish a comprehensive protection mechanism for ecological conservation areas, and strictly prohibit the construction of tourist resorts, golf courses, villas and private clubs by using circulating agricultural land.

The relevant departments should hold to account leading officials who have breached the red line of ecological protection, occupied ecological space or failed to solve serious environmental problems for the rest of their lives.

Also, the draft noted that within core nature reserves, activities unrelated to ecological protection will be prohibited, and violation of this clause can incur fines of 100,000 yuan.

The report said the zones are an important ecological barrier and water source protection area of the capital, describing them as a "big oxygen bar" and "back garden" of the city.