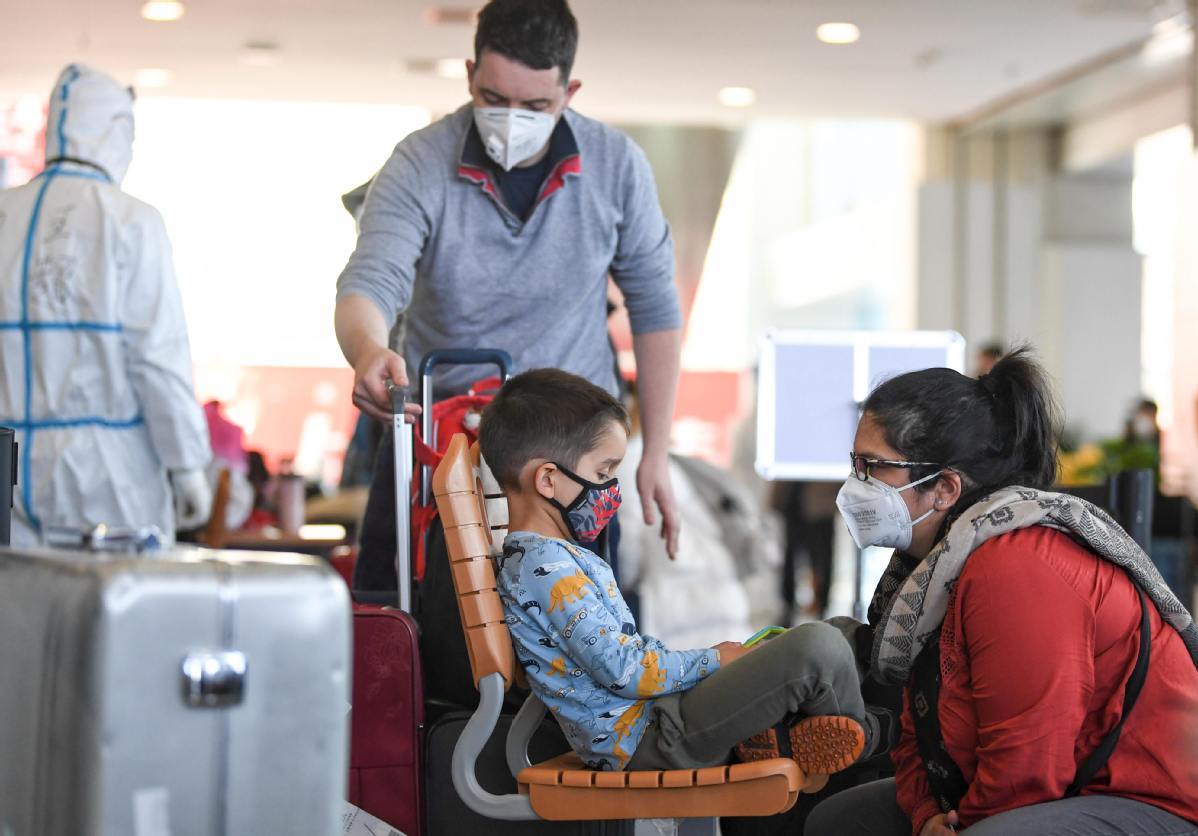 Inbound travelers wait to register their information at the New China International Exhibition Center in Beijing's Shunyi district on Tuesday. All arriving travelers are required to register. (Photo: China Daily)

About 6,000 inbound travelers were received on Wednesday at the International Exhibition Center where they, as required, filled out health forms, registered identity information and waited for chartered transportation to their home areas.

Forty-seven transfer zones for provinces across the country and districts in the capital had been set up within the special hub in Beijing's Shunyi district near Beijing Capital International Airport to temporarily hold passengers arriving at the capital airport from overseas. It is aimed at containing the growing risks of imported infections of COVID-19.

Mao Luqi, 25, a Beijing native arriving from Paris via Abu Dhabi, said it took him four hours waiting to have his residence information confirmed by his district office in Xicheng. After that, he could get on the chartered bus to his home district.

Mao, a student of the Polytechnic University of Tours in France, said he had decided to fly back about a week ago for graduate fieldwork.

"I didn't have a meal for about 40 hours on the plane," Mao said. "I always wore a mask and goggles for protection, and I couldn't wait to get back home."

By the end of Monday, 14,595 travelers from 109 international flights arriving at the special D Zone of Terminal 3 at the airport had been transferred to the hub since it began operating on March 10, officials said. Among Beijing's 16 districts, Chaoyang and Haidian had the lion's share of passengers living in the capital.

Zhang Dongchuan, a senior official in the Haidian district government, said they picked up about 280 to 300 inbound passengers daily from the transfer hub to the designated quarantine hotels. "And the numbers have been increasing," he said.

To support the Shunyi hub's ope-ration, the district government assigned some 55 civil servants to work in four shifts every day to help arrange travelers' registration and quarantine procedures, Zhang said.

Preventive measures are carefully practiced to ensure staff workers' health, and regular sterilization of the facility has been conducted every day. A designated hotel in Haidian was also assigned to accommodate workers from the hub.

Passengers transferred to the hub were all determined to be free of virus-related symptoms. Those displaying symptoms like a fever would be sent to designated hospitals in the city, like Xiaotangshan Hospital in northern Beijing, for further medical observation or treatment.

For passengers with final destinations outside Beijing, after their registration at the provincial transfer zone, they would be accompanied by special staff from the province to the train station or the airport to begin the journey home.

If those travelers decided to leave Beijing the next day, they would be transferred to designated quarantine hotels to prepare for their next trip.

Beijing has seen a rising risk of imported cases. In the 12 hours from midnight to noon on Wednesday, the capital reported 11 imported cases－five from Spain, four from the United Kingdom and one each from Brazil and Luxembourg, according to the city's health commission.

Pang Xinghuo, deputy director of the Beijing Center for Disease Control and Prevention, also advised overseas Chinese students on Wednesday in a media briefing not to return to the country if not necessary.

Wang Xiaoyu contributed to this story.