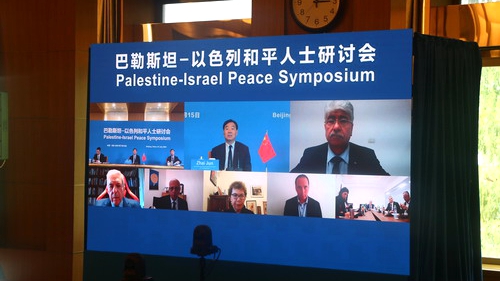 Chinese State Councilor and Foreign Minister Wang Yi on Thursday invited Palestinian and Israeli negotiators to hold direct talks in China and reaffirmed Beijing's support for a two-state solution to end the conflict.

Wang made the remarks at a symposium for Palestinian and Israeli peace advocates, which was the fourth symposium of its kind held by China since 2006.

Stressing that the Palestinian question is the core of the Middle East issue, he put forward a four-point proposal for resolving the issue.

In the first step towards resolving the issue, Wang called for a commitment towards promoting peace, efforts from stakeholders to reject extreme violence and expand the role of peace advocates. China supports the Geneva Initiative in playing a more significant role and stands ready to provide assistance and engage in the process of resolving the issue, he said.

The Geneva Initiative, also known as the Geneva Accord, is a joint Palestinian-Israeli peace movement aimed at achieving the two-state solution.

"We will continue to invite young people from Palestine and Israel to China for exchanges and dialogue in a common effort to sow the seeds of hope and grow the sprouts of peace," Wang added.

Palestinians run away as fire broke out after an Israeli airstrike on a house in the southern Gaza Strip city of Rafah, May 15, 2021. (Photo: Xinhua)

Second, he called for efforts to advance peace talks. Noting that this year marks the 30th anniversary of the Madrid Peace Conference, he said the principle of "land for peace" established at the conference provided energy for the Palestinian-Israeli peace process.

"China welcomes representatives from the two sides to come to China for direct negotiations and will be happy to offer dialogue platforms for all those from Palestine and Israel that are committed to promoting the vision of peace," he said.

Third, efforts should be made to alleviate the humanitarian hardships suffered by the Palestinians, Wang said, calling for scaling up humanitarian assistance to Palestine and lifting the blockade and siege on Gaza.

After the escalation of fighting in May, China provided $1 million in immediate humanitarian assistance to Palestine and donated another $1 million in cash to the United Nations Relief and Works Agency for Palestine Refugees in the Near East (UNRWA), he noted.

Fourth, Wang reiterated the importance of sticking to the two-state solution. "The past and the present have proven time and again that the two-state solution is the only viable way to resolve the Palestinian question as it represents international consensus, fairness and justice," he said. "Biased solutions or exclusive arrangements will not get anywhere."

China supports the UN in playing a leading role, the diplomat said. China calls for a UN-led international peace conference participated by the permanent members of the Security Council and all stakeholders in the Middle East peace process to restart the peace talks, he added.