The coronavirus found in Beijing's Xinfadi wholesale market is probably more infectious than that detected in Wuhan's Huanan seafood market, where the first wave of epidemic in the country was detected, given a significant number of cases confirmed in only four days in the capital city, a virologist said on Monday. 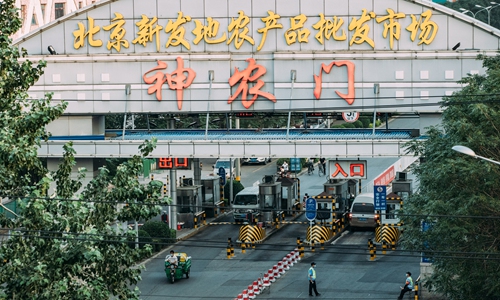 Yang Zhanqiu, deputy director of the pathogen biology department at Wuhan University, told the Global Times on Monday that 79 cases were confirmed in four days, showing the coronavirus found in Beijing is extremely contagious, likely more contagious than that found in Wuhan.

A researcher from the Beijing Center for Diseases Prevention and Control (Beijing CDC) told China Central Television (CCTV) in a telephone interview that the genome sequencing of the strain of the coronavirus which caused the new COVID-19 outbreak in Beijing at the Xinfadi wholesale food market shows it originated from Europe.

Yang said the genome sequencing is like testing human DNA. The genotype of the virus does not mutate in the short term. The mutation usually occurs after two or three years, to even 10 or 20 years. And different virus test results show different genotypes, with the detection of the difference easy to tell.

As of Monday, authorities have screened nearly 200,000 people who had been to Xinfadi wholesale market, where the latest cluster occurred.

Yang noted that Wuhan's Health Commission began releasing reports at the end of December, adding that the number of reported cases had reached 62 by January 17, which is close to the number of newly confirmed cases in Beijing. Although the test sample was large enough and the technical ability was strong, the fact that 79 patients werediagnosed in four days in Beijing is still exceeding the expectations.

What makes people optimistic is that China has accumulated rich experience in epidemic prevention and a strong joint prevention mechanism, and quickly adopted measures to contain the epidemic, Yang said.

Yang believes that different types of viruses bring new challenges to the development of vaccines.

"No doubt different genotypes of the virus can cause the vaccine to be less effective, or even ineffective. That means the vaccine would have to be effective against both viruses circulating in China and those in Europe, adding difficulty to developing a vaccine," Yang explained.

Different types of a virus may cause different symptoms or increase the difficulty of treatment, which has not been confirmed yet. However, Yang is quite sure that the European genotype will not affect the development of effective drugs for COVID-19.

As for the controversial question of the origin of the virus, Yang said that previous studies have shown that the coronavirus does not infect aquatic organisms such as fish, and there is little possibility for salmon to serve as an intermediate host.

There is a possibility that aquatic products or beef, mutton and poultry were contaminated by patients during processing abroad and brought into China through the cold chain.

"China has effectively contained the outbreak, but it was surprising that Beijing was suddenly tested by a local outbreak," Yang said, adding that, "China's epidemic prevention has always focused on the arrival of overseas personnel, and now we should pay enough attention to the customs quarantine of imported agricultural products."