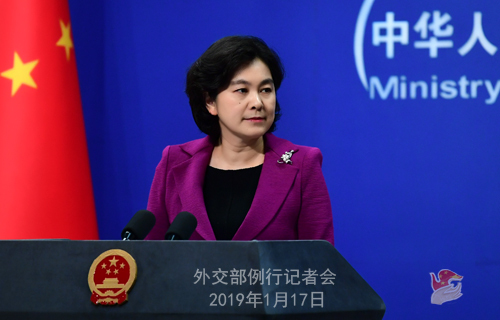 The Foreign Ministry said on Thursday it resolutely opposed the United States' abuse of export control measures after a bipartisan group of US lawmakers introduced bills to ban the sale of US chips or other components to some Chinese telecommunications companies including Huawei and ZTE.

"We oppose the US interference in normal international trade cooperation between enterprises and urge relevant US congressmen to stop unreasonable suppression of Chinese companies and stop the bills," ministry spokeswoman Hua Chunying said at a daily news briefing.

She said the move of the US congressmen reflects extreme arrogance as well as the absence of confidence among some people in the United States. The US is making every effort to suppress Chinese high-tech companies by using the machinery of the state, she added.

The bills were introduced shortly after reports that federal prosecutors in Seattle were investigating Huawei for allegedly stealing trade secrets from US companies like wireless operator T-Mobile.

Hua said the ministry is concerned about the unusual US practice of conducting a criminal probe into a civil case that has been settled.

China has doubts about the intention behind the probe, and the frequent expansion and politicization of civil cases does not conform to the rule of free and fair competition and violates the spirit of the rule of law, Hua said.

Huawei is facing cybersecurity allegations in the US, a market that it has never been able to fully enter despite decades of effort.

A Huawei statement said on Thursday that Huawei and T-Mobile "settled their disputes in 2017 following a US jury verdict finding neither damage, unjust enrichment nor willful and malicious conduct by Huawei in T-Mobile's trade secret claim".

Wang Yanhui, secretary-general of the Mobile China Alliance, an industry group, said as a staunch supporter of the market economy, the US, ironically, is leveraging nonmarket forces to contain the emergence of Huawei, a private Chinese company, in the global technology arena.

"The US is sparing no effort to find whatever it can to use against Chinese tech companies, even digging out cases that had been settled years ago," Wang said. "Such moves could result in shooting oneself in the foot."

In December, Greg Brown, CEO of Motorola Solutions, told Fox Business Network that "Huawei definitely stole trade secrets". But on Jan 11, Motorola retracted Brown's statements, saying, "The comments should not have been made" in light of a public statement issued when the dispute was settled in 2011.

Huawei's troubles are part of broader challenges Chinese tech companies have met in the US. Most Chinese-made telecom equipment has been banned, and a string of Chinese acquisition plans were blocked due to "national security concerns" last year.

On Thursday, Gao Feng, a spokesman of the Ministry of Commerce, said some countries are fanning security concerns toward Chinese tech products, which are groundless accusations. "China's technological development is not a threat to the world, and it can be shared by the globe through trade," Gao added.