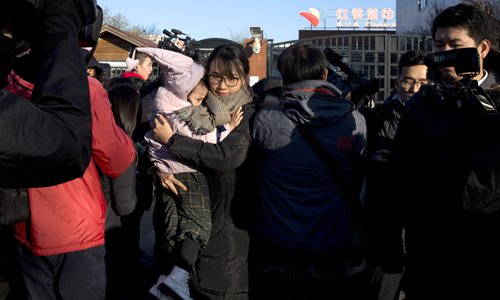 A woman leaves with a child after telling the media she came to withdraw the child from the RYB Kindergarten in Beijing in November, 2017. (Photo: IC)

Police in Beijing's Tongzhou district are investigating allegations that a kindergarten teacher has used needles to prick children under her care, according to media reports.Six parents allegedly found their children aged from 4 to 5 at the Xinghe international kindergarten in Tongzhou had needle prick wounds in recent days.A father who asked for anonymity sent a hospital report to the Global Times, which states that the wounds were confirmed as being caused by a needle. Beijing Luhe Hospital Capital Medical University shows that children had suffered needle stick injuries on their hands, faces and hips.The father claimed that his child was pricked by the teacher once the child refused to take a nap or did not behave.  Parents suspect a teacher surnamed Liu is the culprit, media reported. The father said that Liu always yelled at children, and children said Liu was the fiercest teacher in school. "I am sure my child has been pricked in the last one or two weeks judging by the state of the wound," another mother who claimed to be a medical employee told the Beijing Youth Daily.The involved parents did not send their children to school on Monday, said the father. Parents watched the school's internal video system and said that Liu did not go to work either.The kindergarten refused to comment when the Global Times reached their office on Monday. But it told the Beijing Youth Daily that the kindergarten's surveillance system is real-time and the school has strict standards when it employs teachers. "We trust our teachers. They may get tough on children sometimes, it is impossible for them to prick children.""We have begun to investigate the matter and will announce the findings soon," an employee surnamed He from Tongzhou district education commission told the Global Times on Monday.