Beijing has built a makeshift bio lab and may adopt batch testing to boost the efficiency amid spike in testing demand and backlog of samples. 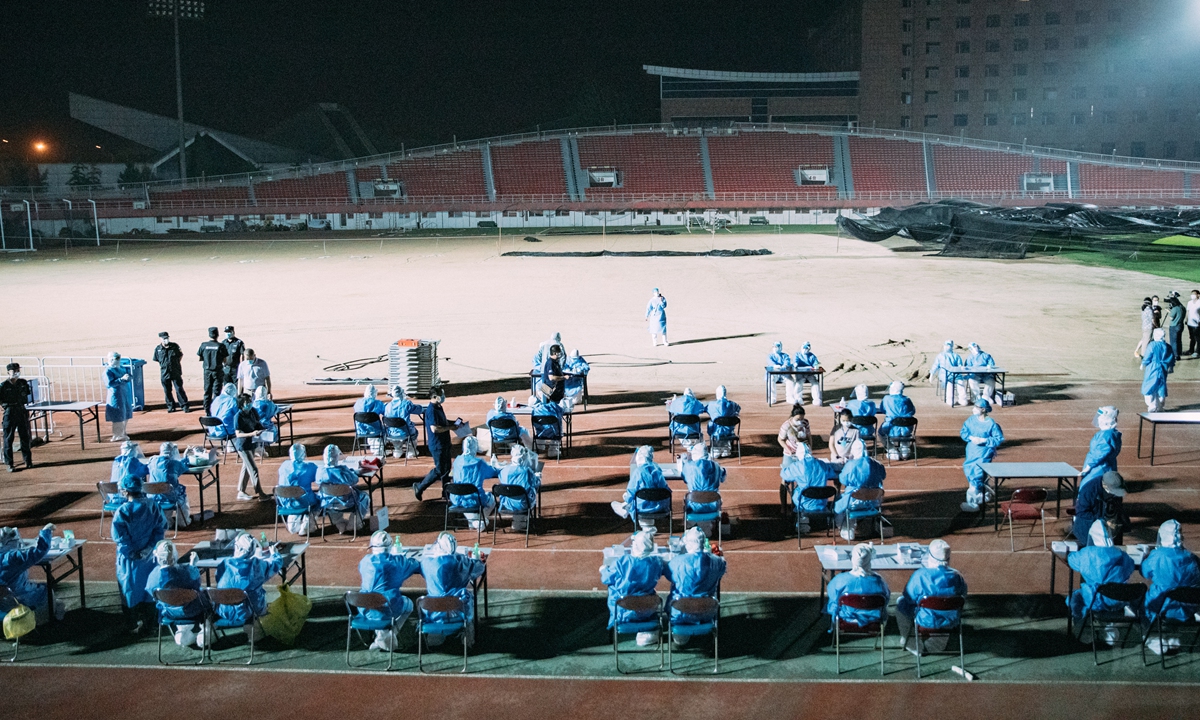 The construction of a makeshift cabin for conducting COVID-19 nucleic acid tests was completed on Sunday at Peking Union Medical College Hospital after only three days of work. It will be put into use on Monday, the hospital said on its WeChat account.

There are eight sample-taking rooms, four rooms for making orders and two for comprehensive services for streaming the flow of people. This system has enhanced the hospital's nucleic acid test capacity, according to the statement.

On basis of standard settings, the hospital made customized designs for its Fangcang cabin for nucleic acid tests. Every room has four doors and two sets of windows to guarantee single-direction flow of people and split channels for doctors and other people. Meanwhile, there is a cross-ventilation design to avoid the spread of the virus.

Beijing authorities on Sunday called for the public to be rational in receiving tests. Residents should make an appointment first but those who have no travel history to high-risk regions or contact with people from high-risk regions are not encouraged to do so.

As of Saturday, the number of nucleic acid testing institutions has increased from 98 to 124, and the maximum daily testing capacity expanded from the previous 100,000 to more than 230,000, Beijing authorities said at a press conference on Sunday.

If it adopts batch testing which mixes five samples in a single test, Beijing could test nearly 1 million people per day.

COVID-19 testing hospitals and institutes are working in full swing to meet the huge gap between the daily collected nucleic acid samples and the daily maximum capability for nucleic acid testing, with the number standing at 500,000 and 230,000 respectively.

An employee from Shougang Hospital affiliated with Peking University told the Global Times on Sunday that the daily testing numbers in their lab ranges from 500 to 5,000 at maximum. Testing staff are working against the clock and many are working overtime during weekends.

Many testing institutes including CapitalBio MedLab said they had been increasing the working staff and testing equipment to cope with increasing amounts of samples. Labs are running 24 hours non-stop.

A total of 212 people from 10 medical teams are coming to the capital city from Hubei, Liaoning and other provinces to support the COVID-19 screening, and extra 30,000 samples are expected to be tested daily.

Beijing authorities require all people leaving the city to have a negative nucleic acid test result, which could affect those who work in Beijing but live in neighboring Hebei Province.

A resident of Yanjiao township, Hebei, told the Global Times that many people asked the toll gates about the new policy but there has not been any official notice.

"I was told that we can enter Beijing freely but may not be allowed to go home without a negative test result," said the resident surnamed Huang.