The demand and capacity for nucleic acid testing in Beijing have surged while the capital has reported newly confirmed COVID-19 cases for six consecutive days as of June 16.

Beijing reported 31 new cases of COVID-19 on June 16, bringing the total number to 137 since the new outbreak started on June 11. 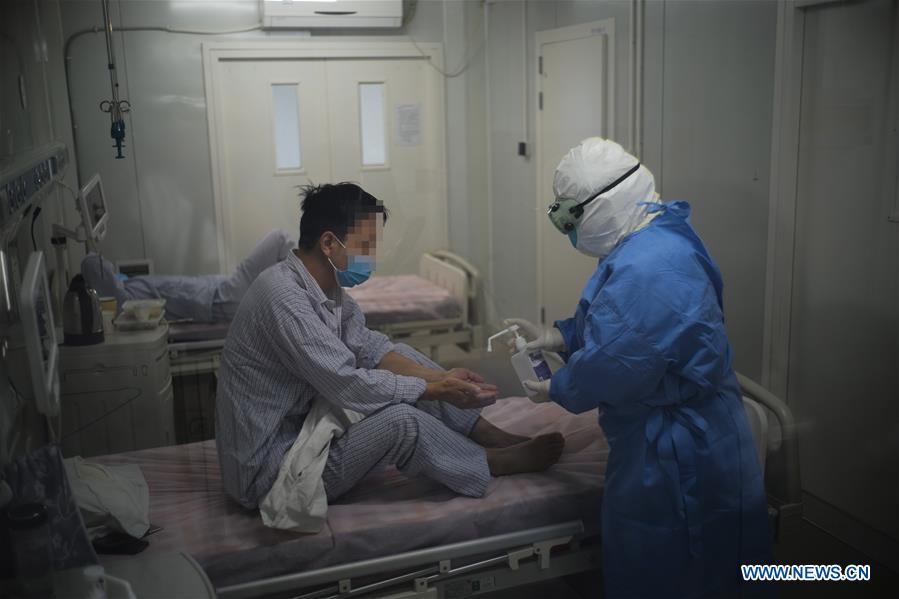 A nurse disinfects the hands of a COVID-19 patient at an isolation ward in Beijing Ditan Hospital in Beijing, capital of China, June 16, 2020. (Photo: Xinhua)

They are high-risk people linked to local markets and confirmed cases, including those at Beijing's Xinfadi wholesale market, residents near the market and people who had contact with COVID-19 patients, Zhang added.

"Tests for other residents from related industries and areas are also underway," Zhang said.

Except for those that are required by the local government to take the test because they have a high risk of being infected by the novel coronavirus, an increasing number of people have also voluntarily applied to be tested, either because of their own concerns or that they were required to do so by their employer.

Some institutions designated for testing in Beijing have been fully booked days in advance, ThePaper.cn reported.

For example, as of June 16, appointments for tests at the First Medical Center at the Chinese PLA General Hospital have been fully booked for the next month.

The large number of people waiting to get tested at medical institutions has resulted in crowds forming at some of these venues, increasing the risk of cross-infection, said a notice issued on June 16 by the city's anti-virus leading work group.

This also puts unnecessary pressure on the institutions conducting the tests, the notice said.

In order to conduct extensive COVID-19 screening, Beijing had increased its daily testing capacity to over 90,000 samples as of June 13, with 98 institutions across the city designated for this task, according to the Beijing Health Commission.

According to Zhang, these institutions can collect 400,000 samples for testing each day, and this capacity will increase over the next few days.

"Testing is a very effective way to find infected patients, but there's no need to conduct tests on a very large scale across the city," said Wu Zunyou, the chief epidemiologist at the CDC.

Wu added that the people who must receive the test are mainly those who are infected, people having close contact with confirmed cases, or those who had been to the Xinfadi market.