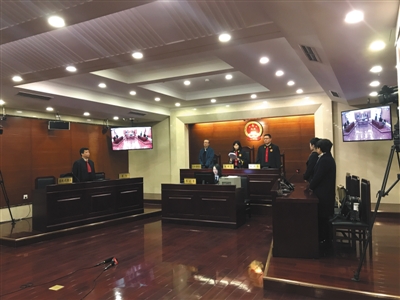 The People's Court of Chaoyang District in Beijing decided to fine Homelink and its two ex-employees 100,000 yuan for information infringement. (Photo: The Beijing News)

In April 2017, the client surnamed Zhao, entrusted Homelink to sell his house in Beijing. He signed agreements with the company and sent copies of his ID card and property ownership certificate to the latter.

Zhao found that his house had been rented to another person and his personal information used to obtain Beijing residence cards upon going to the police to register permanent residence months later.

He then reported the case to the police. In September 2017, Song went to the police station to have the residence cards written off.

The court ruled that a natural person’s personal information is under the protection of the law. Therefore, the conducts of Song and Yang have infringed the civil rights and interests of Zhao.

The court held Homelink responsible for the leaking of personal information, pointing out that the company failed to establish an information security management system, warn the clients of possible information insecurity, as well as encrypt client data.

The Chaoyang court released a notice on Nov.20 to comb and analyze cases on personal information infringement from 2003 to 2017.

The court suggests residents strengthen self-protection awareness, and be cautious when leaving their essential information both online and offline. It also urges industry authorities to heighten management on intermediary agents, and credit reporting bureaus to include personal information protection as an indicator when evaluating a company’s credit status.