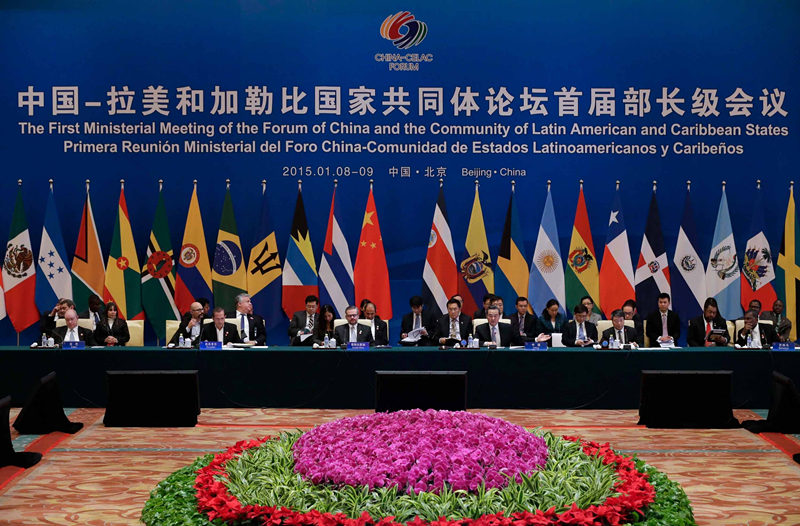 The first ministerial meeting of the Forum of China and the Community of Latin American and Caribbean States took place in Beijing in 2015. (File Photo: Xinhua)

China has no intention to engage in geopolitical competition in Latin America and is willing to advance mutual benefit and win-win cooperation with every country in the region, Chinese Foreign Ministry spokesperson Hua Chunying told a press conference on Thursday.

In a tweet on Wednesday, US National Security adviser John Bolton said he spoke with El Salvador's newly-elected President Nayib Bukele by phone that day, and that they discussed ways to “counter Chinese predatory practices in the hemisphere.”

“The accusations [made by Bolton] are totally unfounded and unreasonable. Justice will prevail. We hope that some people can view China’s relations with Latin America and El Salvador in an open, inclusive and peaceful attitude,” Hua said.

China and El Salvador have built diplomatic relations on the basis of the one-China principle, which conforms to the trend of historical progress, the basic norms of international law and international relations, and the fundamental interests of the two countries and peoples, Hua said.

“It neither targets nor impacts on each other to develop relations with other countries,” she responded.

The Chinese side is happy to see the US and El Salvador developing relations based on mutual respect and non-interference in each other's internal affairs. Similarly, the relations should not hurt normal relations between El Salvador and other countries, she added.

China's cooperation with Latin American countries including El Salvador is mutually beneficial and win-win. “The cooperation has brought a lot of job opportunities to the region, and has effectively promoted regional development and improved people's livelihood,” she said.