Beijing reports one COVID-19 case, breaks record of no local cases in 70 days

Southern Beijing's Fengtai District reported a COVID-19 infection coming from Northwest China's Gansu Province on Tuesday and has requested local residents not to leave if unnecessary. The newly confirmed case broke Beijing's record of no new local cases for over 70 days. 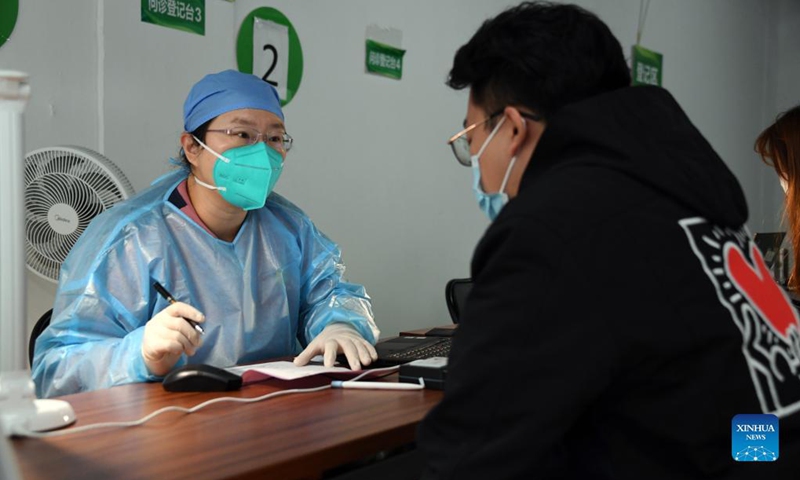 A medical worker asks a man about his physical condition at a vaccination site in Xicheng District of Beijing, capital of China, Oct. 17, 2021. Beijing has begun to offer a third COVID-19 booster vaccine to people of higher risks in some neighborhoods. (Photo: Xinhua)

The patient took the same train with a previously confirmed patient surnamed Ai in Northwest China's Ningxia Hui Autonomous Region. Ai was the close contact of an elderly couple who traveled from Shanghai to Northwest China's Gansu Province and Inner Mongolia Autonomous Region and tested positive for COVID-19 in Shaanxi Province. Another two elderly couples and a man in his 60s in the same tour were also tested positive for coronavirus.

The latest COVID-19 flare-up has expanded to seven provinces, regions and cities.

Two buildings in the residential community where the Beijing patient lives have been closed and residents are not allowed to leave, the Global Times has learned from the street office. Involved personnel are taking nucleic acid tests.

Nine close contacts of the patient have been identified. Six tested negative and the other three are in the neighboring Hebei Province. Their information has been transferred to Hebei authorities.

A school related to one of the close contacts announced it would close for a week. Seven teachers and 92 students who had direct contact with him/her are being sent to the quarantine center, while other teachers and students are receiving nucleic acid testing.

The 249 secondary close contacts are under management.

The Beijing patient surnamed Xu came to the capital on Friday and felt discomfort in the throat on Sunday. The person reported to local epidemic control authorities on Monday about the travel history after finding he/she took the same train with a confirmed patient in Ningxia.

Xu has been transferred to a designated hospital for treatment and was diagnosed as a mild case.

Beijing has strengthened control of people leaving and returning to the city amid the latest sporadic flare-ups. Many companies and institutions in Beijing have requested employees to present a negative nucleic acid test report before returning to work if they had left Beijing.