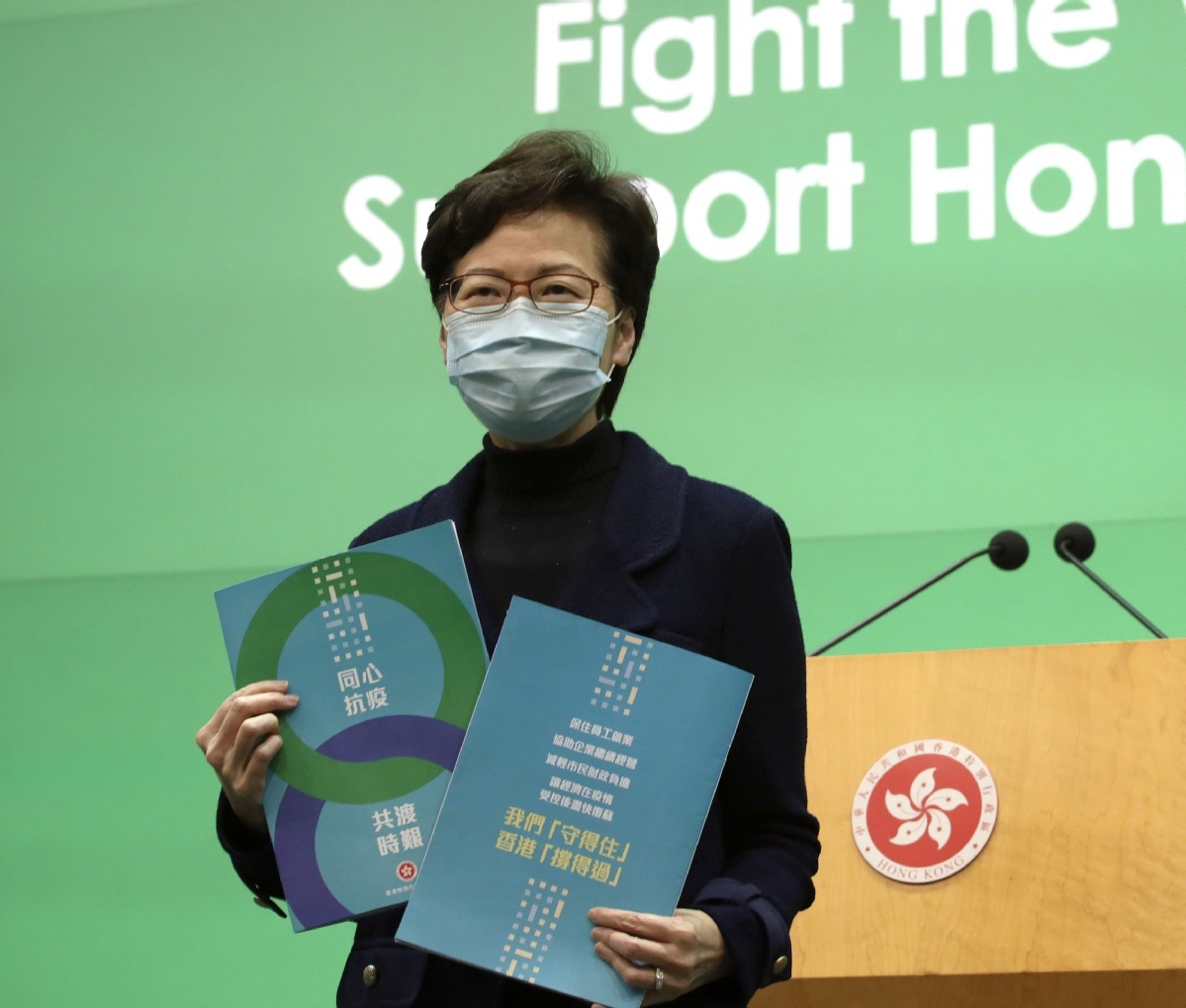 Chief Executive Carrie Lam Cheng Yuet-ngor on Tuesday said the comments on the dysfunctional legislature of Hong Kong made by the central government come out of care and legitimate concerns for the SAR and are well within its powers guaranteed under the "one country, two systems" principle.

The central authorities have given Hong Kong a high degree of autonomy through a constitutional system set out by "one country, two systems" and the Basic Law. But that doesn't mean that the central government has relinquished its power and authority in Hong Kong affairs, Lam said.

In fact, it is only right for the two central government institutions that oversee Hong Kong's affairs to speak up when they see the quagmire in the Legislative Council to ensure the principle of "one country, two systems" is accurately implemented, Lam said.

Thus, these comments are by no means an intervention in Hong Kong affairs, she added.

It was, however, outright meddling when some lawmakers encouraged foreign governments or politicians to butt into the city's affairs or to even sanction Hong Kong, Lam stressed.

Lam's remarks came a day after two central government bodies－the Hong Kong and Macao Affairs Office of the State Council and the Liaison Office of the Central People's Government in the Hong Kong SAR－hit out at some opposition lawmakers who failed to perform their duties in public office by paralyzing the legislature for over six months.

The criticism centered on stalling tactics of the opposition－led by opposition legislator Dennis Kwok Wing-hang－in the election of the chairperson of the LegCo's House Committee, rendering it powerless in processing dozens of bills and subsidiary laws, some of which are aimed at addressing pressing livelihood issues.

Kwok had presided over 14 meetings without any success in electing the committee's chairperson.

The committee serves as a key organ of the legislature, second only to the council's assembly.

It is unacceptable that many of the LegCo's functions, including the making of legislation and a debate on the chief executive's policy address, have not been discharged since October, directly affecting the city's economic development and the livelihood of the people, Lam said.

Irrefutable evidence has shown that the disruptive acts by Kwok and his peers from the opposition camp have brought grave consequences to society, Lam said.

According to her, at least 26 bills have been affected owing to the malfunction of the committee, including bills to increase maternity leave from 10 weeks to 14 weeks, to cut taxes and to name the incoming chief justice.

If all these bills fail to be passed before July when this LegCo term ends, they will all need to be started over, Lam said. It would be a disappointment to all stakeholders that have devoted efforts to these bills, she added.

Leung Chun-ying, vice-chairman of the National Committee of the Chinese People's Political Consultative Conference, said the central government has every right to condemn lawmakers who refuse to perform their constitutional duties under the Basic Law.

Tam Yiu-chung, a member of the National People's Congress Standing Committee, said the criticism by the central government bodies was based on facts. Obstructing the proper functioning of the Legislative Council for half a year was an obvious dereliction of duty, Tam said.

In a joint press briefing inside the LegCo complex with several lawmakers on Tuesday, legislator Regina Ip Lau Suk-yee noted that a legislature that fails to function is detrimental to the well-being of all Hong Kong residents, and, for that reason, the central government has the obligation to speak out.