Beijing Road shopping area blends past and present in Guangzhou 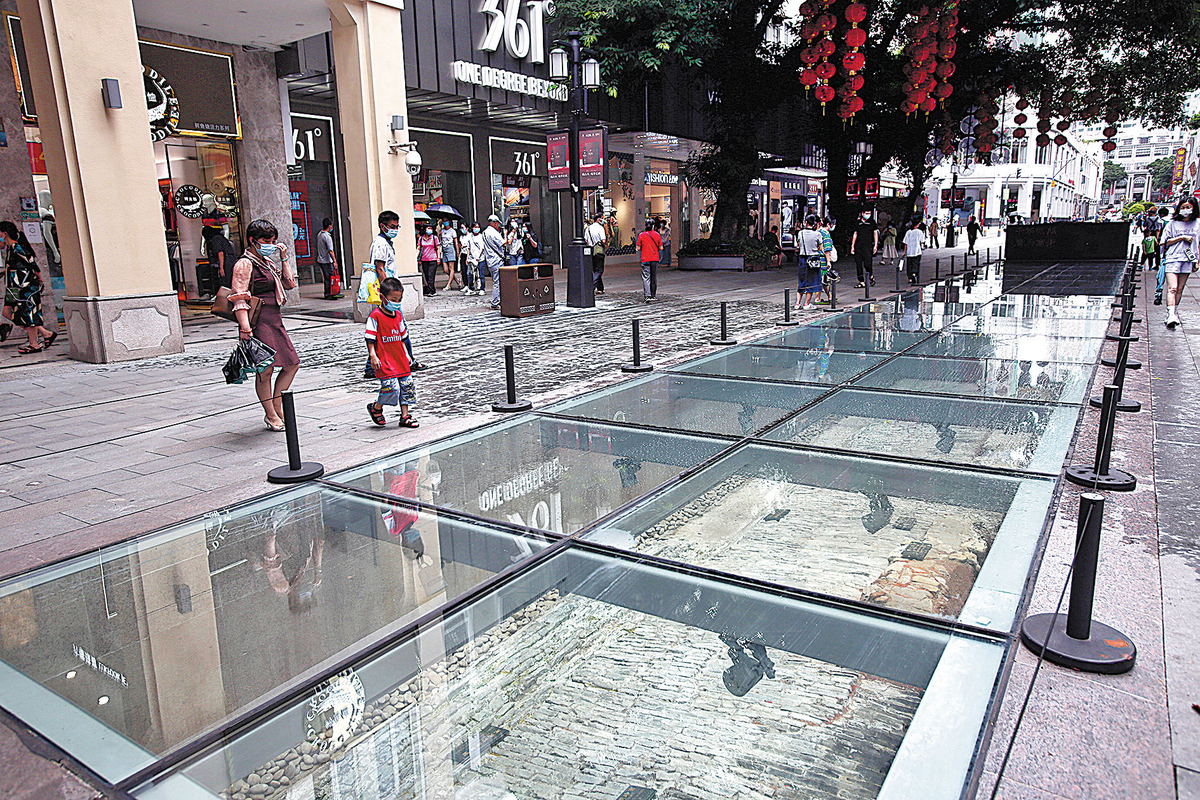 As people walk along the bustling Beijing Road in Guangzhou, Guangdong province, they get a glimpse of the 2,000 years of history to which it has been witness.

The origins of the road-today one of the best - known shopping areas in the country with a number of bookstores - can be traced back as far as 214 BC during the Qin Dynasty (221-206 BC), when the government office of Nanhai prefecture was built in the surrounding area.

This also marked the beginning of the development of Guangzhou, which was then called Panyu and later became the capital of the Southern Yue Kingdom. The kingdom was created by Qin general Zhao Tuo by amalgamating three prefectures. The Yue palace is close to Beijing Road.

Running along the city's north-south axis, the road is lined with qilou -traditional arcade houses - and extends southward to the bank of the Pearl River. Eleven layers of pavement laid from the Tang Dynasty (618-907) to the founding of New China remain.

Beijing Road assumed its current name in 1960 and is home to many historical buildings, including: Taipingguan, the first Western restaurant in Guangzhou, which opened in 1885; the command post for the first armed uprising led by Sun Yat-sen in 1895; and Guangdong's Department of Finance building, which was completed in 1919.

In addition, the foundation of the Gongbei Tower, which was built during the Song Dynasty (960-1279), and a drum-shaped bearing stone of a tower laid during the Ming Dynasty (1368-1644) were also discovered on the road.

"Beijing Road is a very special street, combining both the old and new. Its historical sites have historical, folkloric and architectural significance, but the road is fashionable, too. It has changed greatly since reform and opening-up was adopted in the late 1970s," said Chen Zhiqiang, a Guangzhou resident. "I used to live near Beijing Road, and in the 1980s and early 1990s, there were many shops selling affordable books. I used to spend half the day reading great Chinese and foreign books. That is one of my happiest memories as a student."

In 1997, Beijing Road was among 11 in the country selected to be transformed into pedestrian streets, and the busiest section of the 1,450-meter-long road subsequently became automobile-free.

Some of the adjacent streets were also pedestrianized, creating 3.5 kilometers of automobile-free paths in the area in 2020.

Last year, the numerous shopping centers, stores, restaurants and entertainment venues along the road welcomed 82.14 million visitors and generated 13.78 billion yuan ($2.07 billion) in revenue, according to the Yuexiu district government.

Further upgrades are underway along the road's southern section and some adjacent streets in an effort to extend the total length of pedestrian streets to 4.7 km.