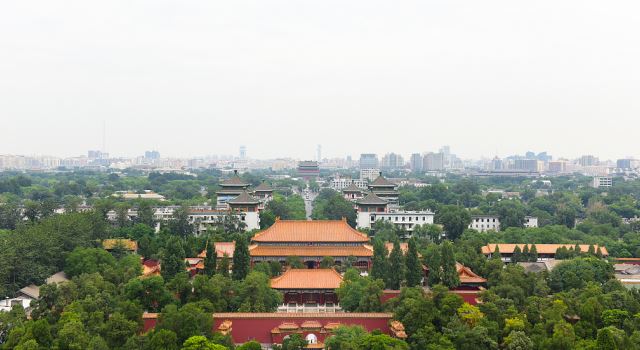 The view of the Jingshan Park, located immediately north of the Palace Museum, on the central point along the north-south axis of Beijing. (File photo: VCG)

Beijing's imperial Jingshan Park is advancing the restoration of ancient buildings within its precincts, as part of the capital city's efforts in getting its iconic central axis into UNESCO's world cultural heritage list, China Daily reported Tuesday.

Located immediately north of the Forbidden City, Jingshan Park is a major component of Beijing's central axis. The completion of the restoration would fully realize the integrity of the axis and the city's sound culture and environment, Cong Yipeng, head of the park, was quoted as saying.

Beijing's central axis is an 8-kilometer notional line that runs along the city center and incorporates Tian'anmen Square.

Official data show that as of July 2018, a total of 14 historical sites existed along the axis, including the Zhengyang Gate, the Forbidden City and Jingshan Park.

These have been identified as key heritage sites and are expected to apply for the world heritage list in 2035.