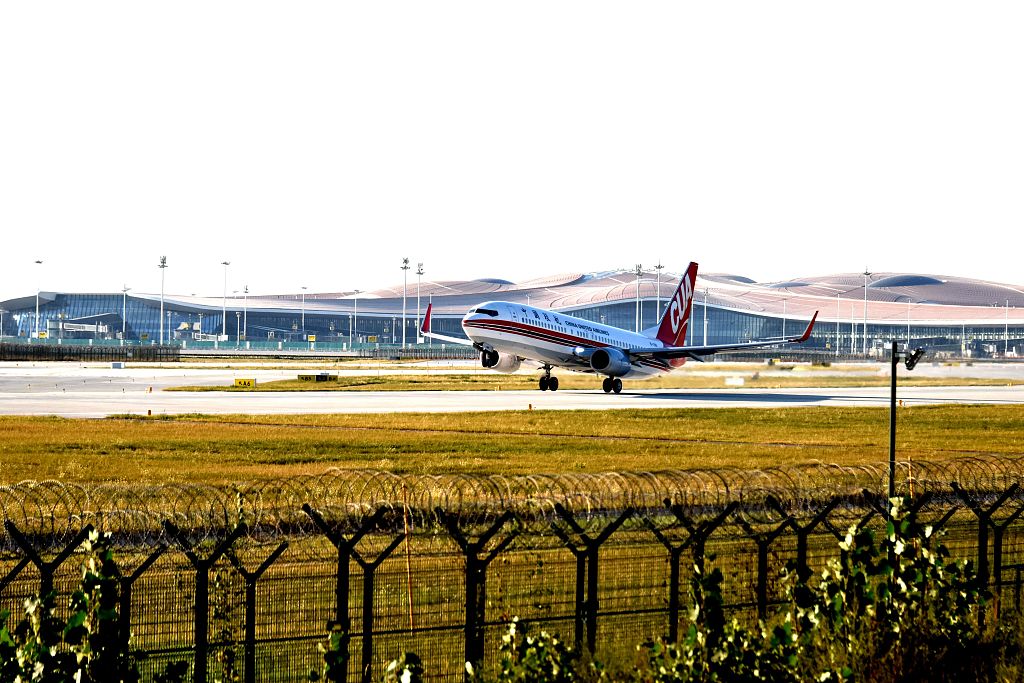 The navigational intelligence for China's new Beijing Daxing International Airport came into effect at 2 am on Thursday. More than 200 airways and over 4,000 flight routes have been adjusted nationwide, forming a brand-new airspace operating environment, which is also the largest-ever scale of airspace adjustment in China.

Airspace optimization involves systematic engineering, and a minor change may cause a large-scale adjustment as the air traffic environment is complex.

The airspace adjustment plan for Beijing Daxing International Airport follows the one-way circulation design idea, involving the reform of certain major routes with over 500 flights into parallel and one-way routes.

On the basis of optimizing the air route network, the air traffic flow in most regions of the country was reorganized, the distribution of flights was balanced, and the congestion of air routes was relieved.

The general purpose of this airspace adjustment was to promote airspace integration, adjust airspace structure, make efficient use of airspace resources and improve the delicate management of airspace, Che Jinjun, head of the Air Traffic Management Bureau, said in a statement sent to the Global Times.

More than 200 airways have been adjusted, with a new mileage of about 4,700 kilometers. Over 4,000 flight routes have been reformed, which involved about 5,300 flights. Additionally, over 100 routes and destinations have been established and 29 civil aviation airports across the country have adjusted their flight procedures accordingly.

As the navigation data for Beijing Daxing International Airport came into effect on Thursday, the reform of the northern section of the Beijing-Guangzhou air passage was completed simultaneously. The 2,000-kilometer-long Beijing-Guangzhou air passage connects the northern Beijing-Tianjin-Hebei region and the southern Guangdong-Hong Kong-Macao Greater Bay Area, which are China's two world-class city clusters.

The airport was officially opened on September 26, marking a monumental milestone that highlighted both the country's prowess in building massive infrastructure and its ambition to further connect the world in keeping with its rising global status.

Positioned as a vital global hub, the Daxing airport will not only serve domestic markets, but will play a bigger role in handling global routes.

There are 66 airline companies operating in the Daxing airport after flights commence. 20 are from the Chinese mainland and 46 are from the Hong Kong and Macao special administrative regions, the island of Taiwan and foreign countries. A total of 116 air routes will be opened, including 15 global routes.