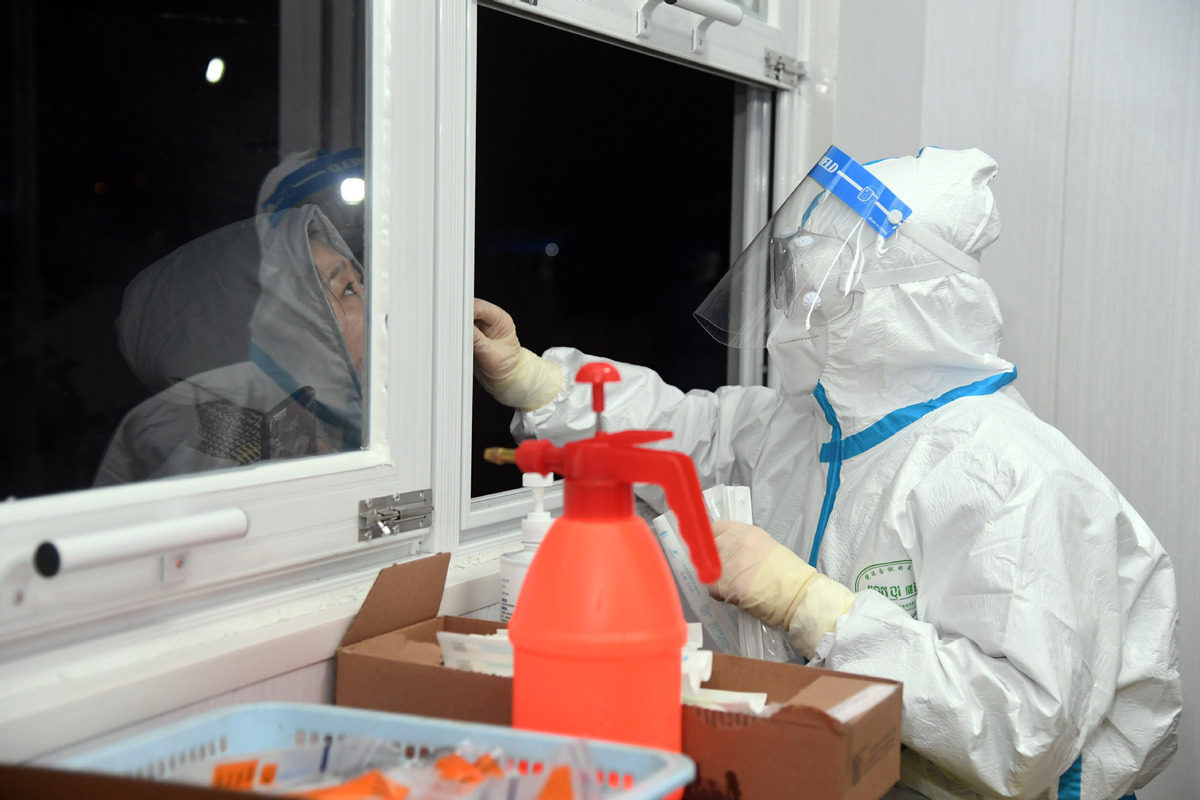 A medical worker collects a throat swab from a resident at a nucleic acid testing site in Shunyi district in Beijing, on Dec 26, 2020. (Photo: Xinhua)

Residents in all communities and areas of Beijing's Shunyi district now face tougher restrictions such as showing pass cards and health codes before entering residential areas, after the district strengthened its virus prevention and control measures.

Emergency measures including conducting closed management, disinfection and large-scale testing have been implemented to cut the spread at the community level, said Zhi Xianwei, executive deputy head of the district.

Shunyi district, where the recent new patients live or work, has collected 1,207,657 test samples, among which, 901,206 have so far been confirmed as negative.

By Sunday, Beijing reported 22 confirmed cases, according to data from the municipal health authority.

In response to the recent infections, Beijing has entered a state of emergency and has vowed to contain the infection and cut transmission of the virus, Xu Hejian, spokesman for the municipal government, said on Sunday, highlighting the complicated situation the capital faces in terms of coronavirus control and prevention.

Li Yi, spokesman for the Beijing Education Commission, said that college students should return home for their winter vacation in different groups at different times in order to reduce infection risks.

Liaoning province has also tightened its virus control and prevention measures since the province has 40 confirmed cases and 31 asymptomatic patients being treated in hospital as of Sunday, data from the provincial health commission showed.

The province's latest round of infections began on Dec 15 when four port workers handling coldchain food products were found to be asymptomatic carriers in the port city of Dalian.

It has rolled out specific targeted measures related to cold-chain product management, such as designating 27 cold storage areas on Dec 19 as the first stop to receive frozen products for the whole province. Eight of these are located in Dalian and five in Shenyang, capital of Liaoning.

All cold-chain food imported from other countries or transferred from other domestic cities must enter the designated cold storage areas for centralized disinfection, testing and supervision, Qu Shouwei, director of Dalian's administration for market regulation, said at a news conference on Sunday.

Personnel disinfect and conduct nucleic acid tests of every batch of imported cold-chain food at these designated cold storage areas, which had a total capacity of 668,700 metric tons by Dec 24.

Dalian requires that all cold-chain food product containers and bulk cargo－both imported and transferred from other domestic cities－must be disinfected before leaving the port.