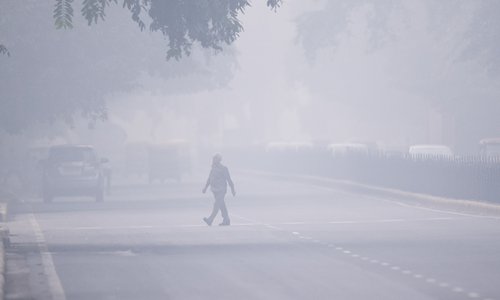 A man crosses a street in smoggy conditions in New Delhi, India on Monday. (Photo: AFP)

China's remarkable achievements in reducing and managing air pollution could be educational for India, Chinese environmental scholars told the Global Times on Monday after the densely populated capital of the South Asian nation declared smog alerts this week.

If New Delhi could learn something from Beijing's success, then given its smaller emissions, the city could solve its smog problems faster than Beijing, Ma Jun, director of the Beijing-based Institute of Public and Environmental Affairs, told the Global Times.

Ma warned there was no one-size-fits-all policy. "It will be a long haul battle for Delhi," Ma said.

An unprecedented public health emergency was declared over the weekend as pollution levels in the Delhi-National Capital Region region reached a three-year high.

As of Monday afternoon, the New Delhi Air Pollution real-time air quality index remained at a largely hazardous level with the reading exceeding 620 in some northern parts of the city. Schools in the Indian capital city were ordered closed and construction activities called off till Tuesday and more than 30 flights were reportedly diverted on Sunday, as pollution entered the "severe plus" or "emergency" category late Thursday night, the first time since January, New Delhi Television reported.

The Delhi smog crisis served as a reminder for Beijing that efforts to combat air pollution must still continue, said Beijing environmentalist Ma, and it was too early to rest on any laurels.

A report released by Greenpeace and air pollution tracking app Airvisual indicated that average concentrations of pollutants fell in Chinese cities by 12 percent from 2017 to 2018, while the capital Beijing fell out of the top 100 most polluted cities worldwide following concerted efforts to get air pollution under control.

But India has yet to initiate sustainable, nationwide pollution action plans like Beijing and overall awareness in Indian society that could help monitor the implementation of such plans, has not been established, Ma noted.

What India might learn from the Chinese experience, in particular, was the introduction of real-time monitoring of companies' emissions and the replacement of dirty fuel with clean energy, he said.

Of course, the Indian capital city must also focus on adjusting its transport mix and infrastructure, he said.

In October, China issued a tougher plan to control air pollution in Beijing, Tianjin, Hebei and surrounding regions. Tianjin was told to shut down one 588-cubic-meter blast furnace.

New Delhi banned fossil-fueled cars on alter-nate days from Monday to November 15 according to their odd or even number license plates, a practice Beijing adopted before in response to extended bouts of choking acrid smog.