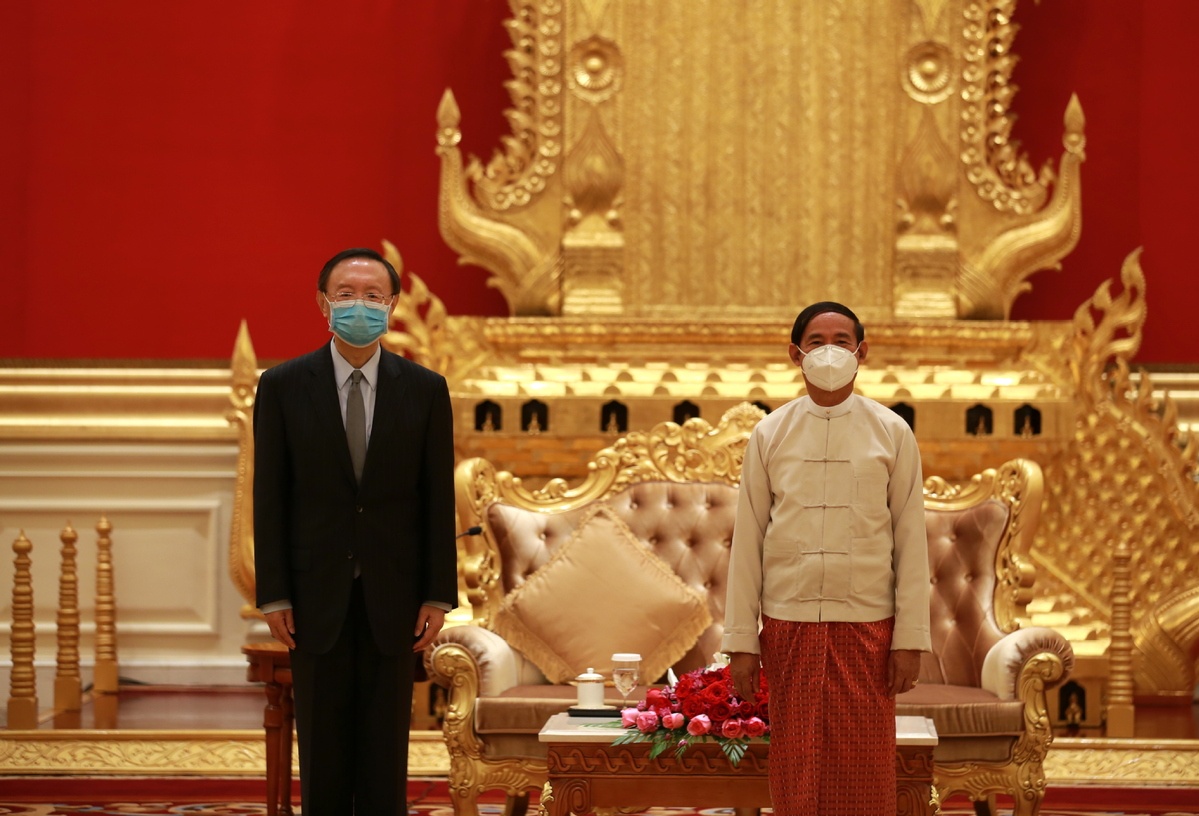 Myanmar President U Win Myint (R) meets with Yang Jiechi, a member of the Political Bureau of the Communist Party of China (CPC) Central Committee and director of the Office of the Foreign Affairs Commission of the CPC Central Committee, in Nay Pyi Taw, Myanmar, on Sept 1, 2020. [Photo/Xinhua]

NAY PYI TAW, Myanmar－Myanmar President U Win Myint and State Counselor Aung San Suu Kyi held separate meetings on Tuesday with Yang Jiechi, a member of the Political Bureau of the Communist Party of China Central Committee and director of the Office of the Foreign Affairs Commission of the CPC Central Committee.

While noting that Chinese President Xi Jinping's successful visit to Myanmar this January had advanced relations between the two countries into a new era, Yang said China was willing to work with Myanmar to implement the consensus reached by the leaders of the two countries and jointly build a China-Myanmar community with a shared future.

Yang called on the two neighbors to strengthen high-level exchanges, consolidate and deepen political mutual trust, advance cooperation projects of the China-Myanmar Economic Corridor, upgrade bilateral trade and investment, accelerate the resumption of work and production, and jointly build the Belt and Road with high quality.

As this year marks the 70th anniversary of bilateral diplomatic ties as well as the China-Myanmar Year of Culture and Tourism, the two countries should enhance people-to-people and cultural exchanges, the senior Chinese diplomat said.

Yang also said that China and Myanmar were helping each other in the fight against the COVID-19 pandemic and China was willing to give priority to sharing vaccines with Myanmar once one is developed.

Yang called on China, Myanmar and other related parties to bring innovation into their cooperation within the China-ASEAN and Lancang-Mekong frameworks and focus on the fight against COVID-19 so as to promote regional peace, stability and joint development.

As countries which had jointly initiated the Five Principles of Peaceful Coexistence, China and Myanmar should firmly uphold international fairness and justice and practice multilateralism, Yang said.

Leaders from the Myanmar side appreciated the support extended by China and commended China's constructive role in the country's peace process, saying that the bilateral relations were truly built on the basis of mutual understanding and respect.

Myanmar is willing to work with China to overcome the impact of the pandemic, deepen high-level exchanges, comprehensively push forward the construction of the Myanmar-China Economic Corridor, enhance communications and coordination in the international arena, and build a Myanmar-China community with a shared future, said the Myanmar leaders.

The Myanmar leaders said the two sides should work closely within frameworks in pursuit of the well-being of people in the region, and Myanmar always adhered to the one-China principle and firmly supported China in safeguarding its sovereignty, security and development interests.