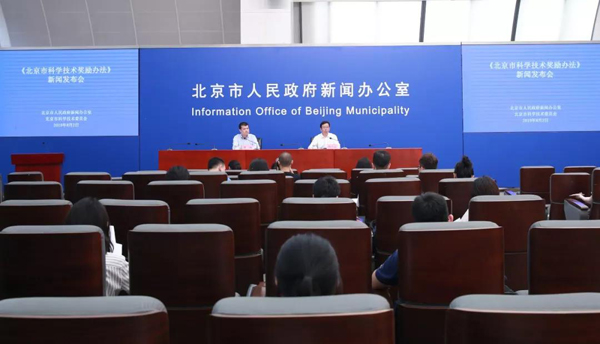 BEIJING, Aug. 5 (Xinhua) -- Beijing has updated the regulations of its science awards by setting up three new categories for individuals, including foreign talent, the municipal government said.
According to the revised regulations released on Friday, winners of the three new awards will be individuals who have made outstanding scientific and technological achievements, young talent under the age of 40 and foreigners who have made contributions to promoting Beijing's science and technology development.
Established in 2002, the city's science awards have never set nationality restrictions on winners. Last year, 16 foreigners were awarded science awards, said officials.
The newly added award exclusively for foreign individuals will encourage more foreign scientists to carry out research and activities in Beijing, China's capital city and center for innovation and international communication.
The city's science awards also have three other categories to reward citizens and organizations that have made achievements in natural science, technological invention and sci-tech progress.
Another revised rule is that candidates will no longer be recommended but instead be nominated. Winners of China's National Science and Technology Awards, the academicians of the Chinese Academy of Sciences and the Chinese Academy of Engineering, as well as previous winners of the awards, are eligible to nominate candidates.
Yang Renquan, deputy director of the Beijing Municipal Science and Technology Commission, said that the new regulations, starting this year, put more emphasis on the incentives for talent, which will stimulate the vitality of scientists and promote Beijing to implement the strategy of innovation-driven development.
Since 2011, Beijing has awarded 1,595 sci-tech innovation achievements, which led to 23,800 patents and generated economic benefits of more than 880 billion yuan (about 125.2 billion U.S. dollars). A total of 57 winners were elected academicians.