Some Beijing communities have rolled out COVID-19 vaccinations for people aged 60 and above, the Global Times learned, amid doubts why the Chinese mainland delayed providing the elderly with vaccines while Hong Kong Special Administrative Region (HKSAR) gives the group top priority. 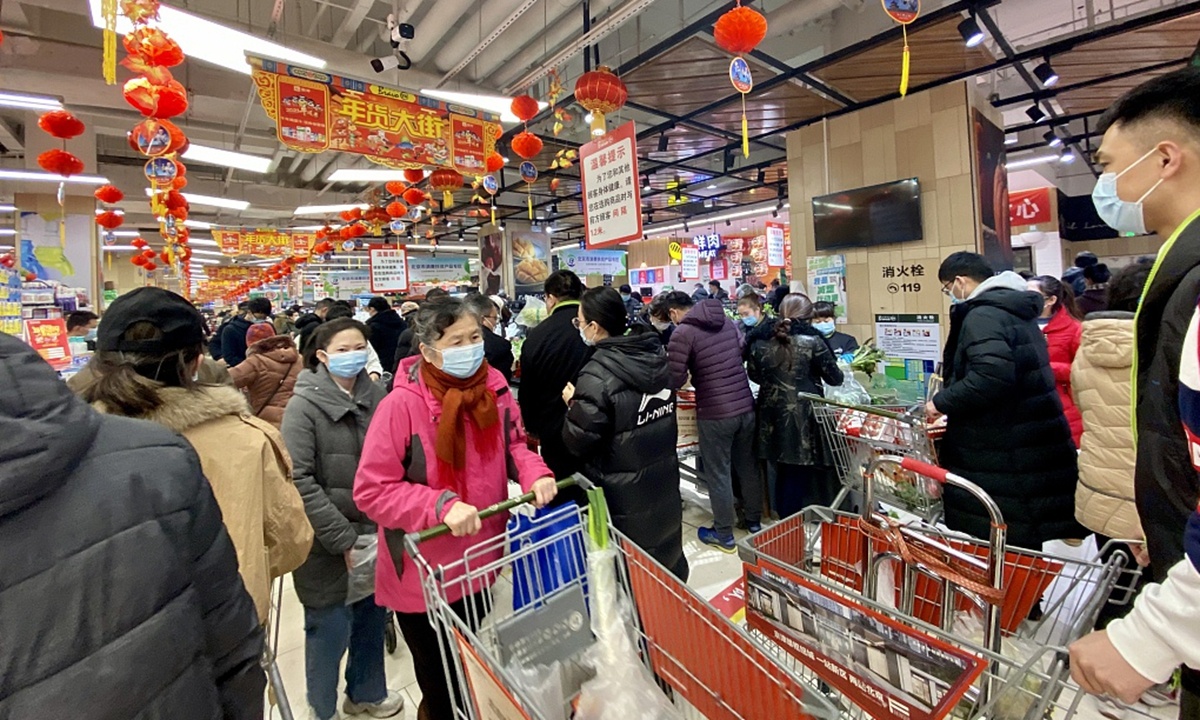 A supermarket in Beijing. (Photo: VCG)

Chinese experts explained that vaccination priority varies in the mainland and HKSAR based on different epidemic situations. Mainland authorities focused on preventing imported cases so they gave priority to people working in areas where imported cases would most likely occur, they explained.

A staff member of the Yong'anmen community office in Beijing told the Global Times on Monday that COVID-19 vaccinations for seniors over 60 years old have already begun in the area.

Local senior citizens can sign up for their shots at the neighborhood committee, which will arrange a vaccination for them. Elderly residents from other provinces living in the neighborhoods can also apply, according to the staff member.

A screenshot of a notice in a Chaoyang district community asking residents of 60 years old and above to register for vaccination also spread on social media over the weekend.

The Global Times reached the community office on Monday. An office staff member did not deny the information, but she refused to disclose details.

But it seems not all Beijing communities have started the work.

Two residents separately living in the Daxing and Xicheng districts reached by the Global Times on Monday said they had not received such a notice from local authorities.

They expressed worries over the physical condition of their senior family members, saying "there is no rush in getting the shots" as the epidemic in Beijing has been controlled.

The Global Times also reached disease control and prevention authorities in Shanghai, and Jiaxing and Yiwu in East China's Zhejiang Province, all of whom said they have not started vaccinations for people above 60.

The Chinese mainland kicked off mass vaccinations for high-risk groups in December 2020, with two domestic vaccines separately developed by Sinopharm and Sinovac. Only people aged between 18 and 59 could get vaccinated, according to instructions from the national disease control and prevention authority.

Tao Lina, a Shanghai-based vaccine expert, told the Global Times on Monday that more places across the country possibly would start vaccinating people aged 60 and above in March after the two sessions - China's most important annual political events.

Doubts arose recently over the necessity of the restrictions on the elderly to access COVID-19 vaccines after China's Hong Kong region started mass vaccinations with Sinovac vaccines on Friday where people aged above 60 were included in the priority groups together with medical workers and cross-border truck drivers.

A report of the Financial Times on Sunday said that age restrictions on the use of the Sinopharm and Sinovac shots have contributed to slowing the rollout of mass vaccinations on the Chinese mainland.

Jin Dongyan, a professor at the School of Biomedical Sciences at the University of Hong Kong, told the Global Times on Monday that the Hong Kong regional government decided to provide the elderly with vaccines as they are one of the high risk groups to the novel coronavirus.

The decision was made after a local expert committee reviewed the materials Sinovac submitted and found no extra risk for the elderly group to accept the vaccines compared with people aged between 18-59, Jin said.

But mainland authorities have other considerations on the group based on the current epidemic situation on the mainland.

Wang Bin, an official from China's National Health Commission, previously told media that the age restrictions were made based on the anti-epidemic policy centering on preventing imported cases.

Given the policy, mainland authorities gave priority to people working where imported virus would most likely occur, such as the cold-chain transportation industry and the frontier inspection stations, Wang explained.

A Beijing-based vaccines expert told the Global Times on Monday on condition of anonymity that it is better to stay cautious about using current vaccines on older people as the current COVID-19 vaccines are not the best products yet, and China's successful control of the epidemic makes it unnecessary to take such risk. Not to mention the reports of elderly people dying after accepting vaccines in Europe and the US.

Although no evidence has been found to connect the deaths to the vaccines, it is better not to make old people take the risk, given the fact the epidemic has been controlled on the mainland, the expert noted.

The FT's Sunday report claimed that China is far behind other big economies in forming herd immunity - it was 2.9 doses per 100 residents who have received the vaccine on the Chinese mainland as of early February.

Jin expressed similar worries, noting that, considering the target to vaccinate 60-70 percent of population to establish herd immunity, the current progress of the mainland's vaccination program is probably a little slow.

If some places, where the epidemic used to be serious or vaccination proceeded fast, such as New Delhi and Israel, could reach herd immunity by the end of the year and resume international travel, I am afraid an "immunity gap" would occur between the mainland and these places, pushing up the risk of imported cases to the mainland, Jin warned.

However, the Beijing-based anonymous expert denied the accusation by the FT.

"I don't think our vaccination is slow. We administered the second most doses following the US and the number is about four times that of India, which has a similar population with China," he said, noting that "our rate is actually really fast."

As to the "immunity gap," the expert said that even Israel, the country with the fasted vaccination program, still reports high daily new cases, so it is still too early to say that China will lag behind by the end of the year.

The Chinese mainland has administrated 52.52 million doses COVID-19 vaccines as of the end of February, inoculating about 3.56 percent of its population, Chinese top respiratory expert Zhong Nanshan said at an online forum on Monday night. Zhong said that China plans to administer 40 doses per 100 people against COVID-19 by June.

According to the US Centers for Disease Control and Prevention, 75,236,003 doses have been administrated in the US as of February 28.

China performed the best in controlling the epidemic, so mass emergency vaccination is not a priority here. The country is also improving its vaccines while carrying out mass vaccination according to its own pace, according to the expert.

Tao noted that it is also very likely for China to realize herd immunity in the second half of the year after the central government shifts focus from international provisions to domestic vaccination, given the successful practice that the mainland authorities finished vaccinating 100 million children between September 11 and 20, 2010, to successfully prevent a potential measles epidemic.