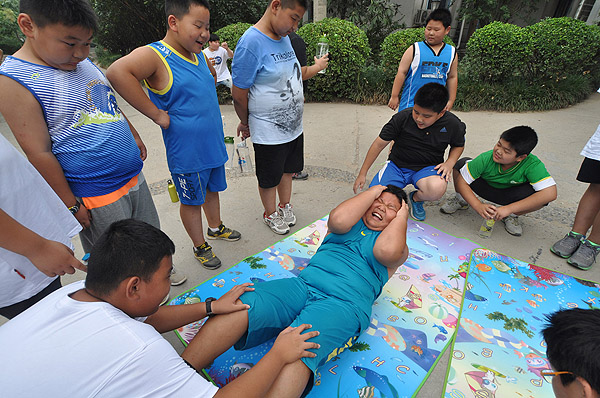 A boy struggles while doing a sit-up at a summer camp to tackle child obesity in Zhengzhou, Henan Province, on July 14, 2013. (Photo: Xinhua)

Beijing will create a database for children's eye health, a move that will help schools and doctors to detect problems and give suggestions to parents, said Xi Shuyan, director of the division of elderly, maternal and child health of the Beijing Municipal Health Commission.

To target obesity, Beijing will create model diet programs for children and invite nutritionists to give suggestions on eating healthy, she said.

About 58.6 percent of students in primary and secondary schools in Beijing suffered eye problems during the 2016-2017 school year, according to the 2017 Beijing Health and Population Health Report.

About 16.8 percent of students were overweight, an increase of 3.1 percent compared with the 2015-2016 school year, the report said.