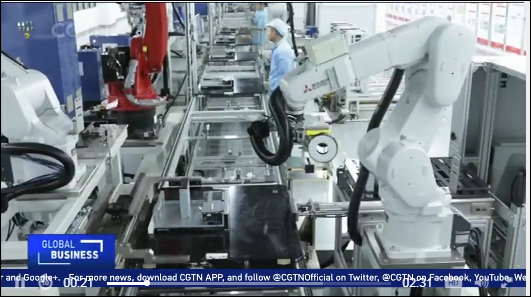 The Chinese Commerce Ministry said at a press conference on Thursday that it's evaluating the impact of the latest tariffs imposed by Washington and will develop new strategies to help global companies better operate in China.

The Trump administration initiated the latest round of tariffs this week, escalating the trade impasse between the world's two largest economies. Products affected by the new US tariffs include those in the electromechanical, textile and solar energy sectors. The 10 percent tariffs that are currently imposed on another 200 billion US dollars worth of Chinese products are also expected to eventually rise to 25 percent by the end of the year.

"Overseas-funded enterprises are likely to account for nearly half of those affected this time. That's based on our initial assessment. This means the unilateral trade protectionism launched by the US has not only harmed companies and consumers of both countries but also threatened the safety of global industry and supply chains," Chinese commerce ministry spokesperson Gao Feng said.

The Chinese government says it will soon release measures to help enterprises facilitate their businesses in China, including more convenient customs clearance. But one thing is for sure: The Chinese renminbi (RMB) currency won't be used as a tool to boost exports.

"China always insists on market-oriented reforms to RMB's exchange rate. We adhere to the spirit of G20 leaders' declarations and will not conduct the competitive devaluation of the RMB. In the future, we will stick to the market-based reforms to increase the Chinese currency's flexibility," Gao said.

In response, China decided to take counter-measures on Tuesday by imposing duties of five and 10 percent on 60 billion US dollars' worth of US goods. This was a lower rate than the original plan for 20 or 25 percent. The list includes US farm products, liquefied natural gas and chemicals.

Gao stressed that China was right to act and the list has nothing to do with American politics.

"The latest round of tariffs imposed by the US has indeed added uncertainties to China-US trade negotiations. We hope the US side could show its goodwill and sincerity and take convincing measures for timely corrections... to solve the China-US economic and trade issue properly," Gao added.

Six months since the Trump Administration first announced tariffs on steel aluminum, experts say trade tensions won't stop China from continuing its reform and opening up to the rest of the world.