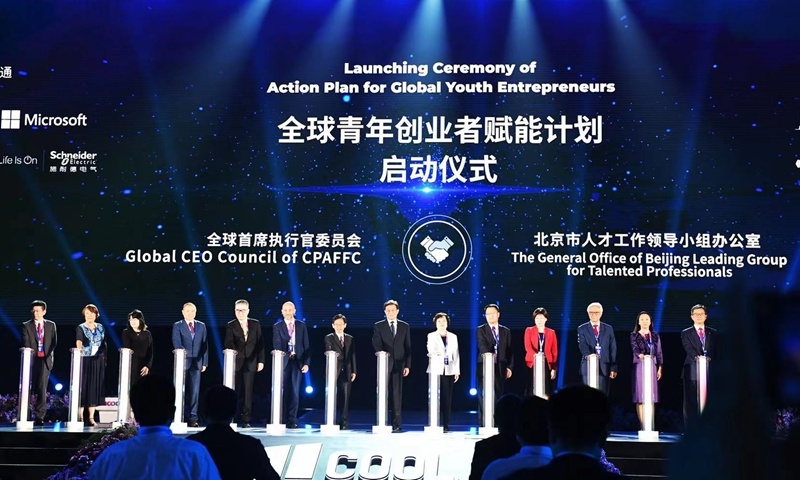 Launching Ceremony of the Action Plan for Global Youth Entrepreneurs during the HICOOL 2021 Global Entrepreneur Summit. (Photo: Courtesy of the summit organizer)

A summit to encourage global youth entrepreneurs kicked off on Saturday in Beijing, with 140 projects mainly in cutting-edge technology and science fields from around the world winning a prize share of a total award fund of 100 million yuan ($15 million). A plan to build an open and convenient international ecosystem was also announced to attract global youth entrepreneurs.

The HICOOL Global Entrepreneur Summit and Entrepreneurship Competition aims to seek high-quality projects worldwide and help them develop in Beijing. The summit started with an award ceremony on Saturday and six projects won first prizes, including a synthetic biology molecular and materials innovation platform, an integrated solution of precise medical treatment for cancer, and a soft robot technology R&D and industrialization project.

The total number of projects registered for this year's competition reached 4,018 with 5,077 contestants globally - 25 percent of them were foreigners, according to a statement sent to the Global Times by the summit organizer.

Among these projects, 140 projects won final prizes and will share a total award fund of 100 million yuan ($15 million). In addition, 336 of them have obtained financing, increasing 66 percent from that of last year.

After the award ceremony, the summit announced an Action Plan for Global Youth Entrepreneurs. Starting from Beijing, the plan aims to build an open and convenient international ecosystem based on the innovation and entrepreneurship needs of young entrepreneurs around the world.

Comparing to starting businesses 10 years ago, the theme of entrepreneurship in China is now undergoing profound changes. A new era of technology-led entrepreneurship has arrived, Shen Nanpeng, founding and managing partner of Sequoia Capital China, said at the summit.

It is the best era for science and technology entrepreneurship. Not only technology applications, but original technology, is worth investing in and starting a business with, Lee said, noting that the era may belong to China.

Beijing Municipality has rolled out its development plan for high-tech industries in the 14th Five-Year Plan period, planning to raise the proportion of the added value of high-tech industries in Beijing to over 30 percent of the city's GDP and build the city into an international science and technology innovation center by 2025.