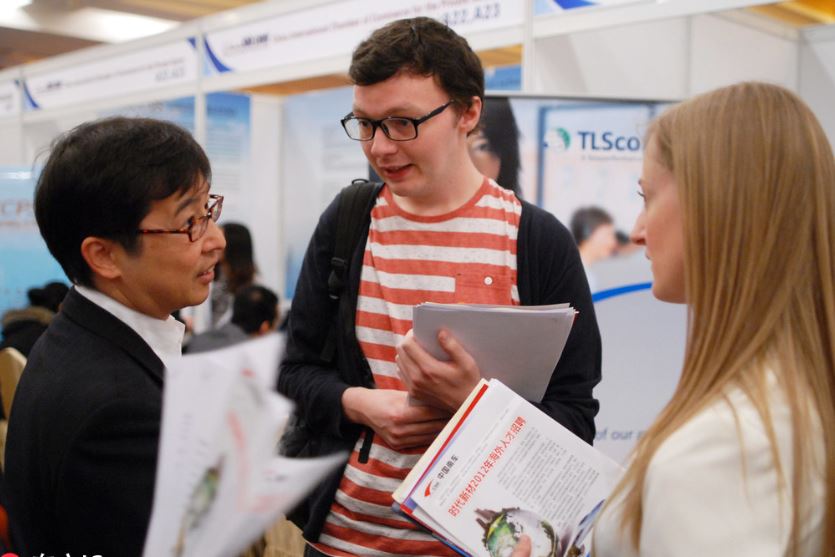 Foreign job seekers talk with an interviewer at a job fair in Beijing, April 7, 2012. (Photo: IC)

Beijing will make it easier for foreign talent to obtain housing and gain permanent residency, as a means of luring more top brains, according to the capital's top authority.

The city will widen channels to bring in global talent and fuel the city's efforts to establish a science and technology innovation center, according to a report delivered on Monday by Mayor Chen Jining to the second session of the 15th Beijing Municipal People's Congress.

Chen said that the municipal government will work with multinationals to set up research and development centers, while encouraging universities and colleges to launch innovation centers and support young entrepreneurs.

Last year, the capital formulated 20 new policies to better serve skilled workers and create a favorable environment, including creating a rule that foreign talent can lead scientific research at the national level, and simplifying their entry and exit procedures.

A science and technology innovation fund of 30 billion yuan ($4.4 billion) was set up in 2017 for new technology incubation, he added.

More than 2,300 skilled scientists have been brought in since 2017, and Beijing had provided them public rental housing, said Xu Qiang, director of the Beijing Municipal Science and Technology Commission.

Tan Xuxiang, director of the city's Reform and Development Commission, said the capital will attract and train a group of scientific talent regarding key technological breakthroughs and industrial development. Young entrepreneurs under the age of 30 will also be trained to become professionals capable of establishing international platforms.

According to the Center for China and Globalization, a think tank based in Beijing, only 1 percent of the talent in Beijing's Zhongguancun area is from overseas.

Among the overseas talent pool, about 70 percent are Chinese who have studied abroad; 30 percent are foreigners.

Wang Yaohui, director of the think tank, said Beijing must accelerate its steps to attract foreign talent because that's the only way the capital can make big strides in innovation.

Zhao Lei, director of Tongzhou district and a deputy to the congress, said construction of the subcenter also needs to draw more international talent to build the district into a high-quality international community.

Huang Dakun, general manager of Atlas International Group in Hong Kong and a member of the Beijing Committee of the Chinese People's Political Consultative Conference, said he was satisfied with the policy on foreign talent but raised some concerns about building the zone.

"The move to attract foreign talent is pretty good, but the government should also focus on how to provide complete surrounding facilities," he said.