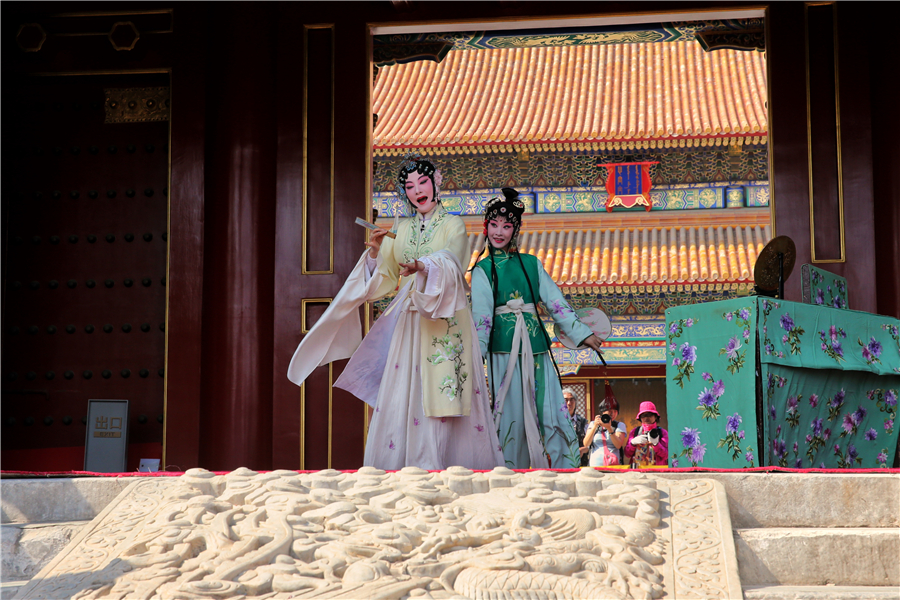 Artists stage a Kunqu Opera performance in front of the Palace of Compassion and Tranquility (Cining Gong) in the Forbidden City in Beijing, on May 18, 2016. [Photo by JIANG DONG/CHINA DAILY]

A key international conference on cultural heritage conservation in Asia will take place in Beijing this week, aiming to further advance cooperation between nations in the region.

In May 2019, in the keynote speech at the Conference on Dialogue of Asian Civilizations held in Beijing, Xi vowed that China is ready to work together with all other countries for the protection of Asia's cultural heritage and provide necessary support for better inheritance of civilizations.

"The NCHA has actively implemented President Xi's significant proposal … and moved forward steadily with the Asian Initiative for Cultural Heritage Conservation, despite the impact of the COVID-19 pandemic on our international cultural exchanges," Hu Bing, deputy director of the administration, said at a news conference in Beijing on Monday. Consensus has been built with other Asian nations on cultural heritage cooperation, he added.

The conference, which most participants will join via video link, has "Promoting Dialogue among Civilizations, Shaping the Future of Asia" as its theme.

China, with 10 other Asian countries, will jointly launch the Asian Alliance for Cultural Heritage Conservation at the conference. It is the first mechanism for cooperation on conservation of cultural heritage across Asia.

A document to guide Asian nations on conservation action will also be released and the Asian Fund for Cultural Heritage Conservation inaugurated to support conservation, research and joint archaeology programs as well as cultural heritage exhibitions across the region.

A program for outstanding young figures in cultural heritage conservation will also be announced to train young professionals and help advance the conservation initiative.

Government representatives, scholars and experts will deliver 26 panel presentations on the role of cultural heritage in promoting sustainable development, deepening exchanges and understanding of civilizations, and facing future challenges.

Hu said some concrete progress has been made on cooperation since 2019. China has worked with Tajikistan, Kyrgyzstan and Myanmar on joint archaeological excavations and technical collaboration for World Heritage nominations. An exhibition of artifacts and art from ancient Syria opened in Shenzhen, Guangdong province, in August and runs to November, Hu said.

China, Afghanistan and Pakistan also launched a forum on cultural heritage in 2019, and an advanced workshop for professionals on preservation of stone monuments was held online in May.