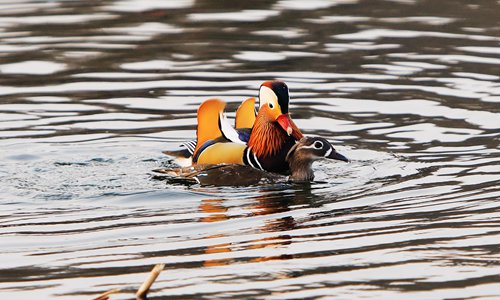 Two Mandarin ducks frolic in a pond in a park in Beijing on March 1. P(hoto: VCG)

The Beijing Wildlife Rescue and Rehabilitation Center is to launch a survey this month on Mandarin ducks  (Aix Galericulata) for the first time to find out how they adapt to urban life, according to the Beijing Municipal Forestry and Parks Bureau.March 3 marks World Wildlife Day. To mark the occasion, Beijing will launch a survey into the wildlife habitat in urban built-up areas and set up conservation areas to restrict human activities so that wild animals can live more freely.The integrated survey into precious species such as the Mandarin duck will involve analyzing their species, numbers, distribution, survival and threatening factors in this city.In an investigation carried out on January 27 with the support of volunteers, 547 Mandarin ducks were found in nine major habitats within Beijing's fifth ring road, Shi Yang, the person in charge of the investigation, told Beijing Youth Daily.The Mandarin duck is an auspicious icon China, representing love between man and women. The survey will last three to five years, during which large amounts of data will be obtained to learn more about the numbers and distribution of the bird, which will serve as a foundation for research into the Mandarin Duck's reproduction and migration patterns, said Shi.The best way to protect wildlife is to protect their habitat, especially the large trees, and bushes around rivers and lakes, Luo Juchun, a professor at Beijing Forestry University, told Beijing Youth Daily."Birds prefer the wild, and cities have a certain influence on their daily activities. However, Beijing has created a living environment for them as a modern metropolis with its good afforestation," said Shi.