BEIJING, May 29 (Xinhua) - Beijing will open its first bike-only road Friday to ease traffic pressure and cut the commute time in Huilongguan, a residential neighborhood in the capital city's northern suburbs. 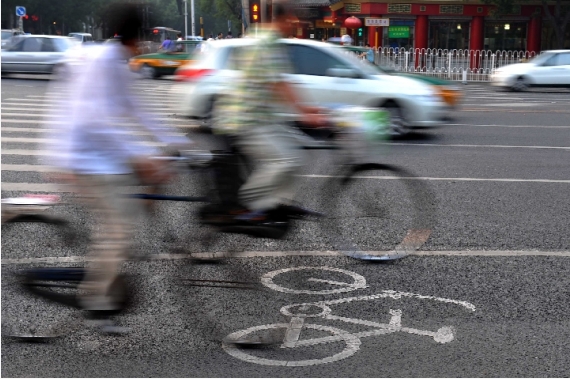 People ride bikes in the bicycle lane on a street in Beijing, capital of China, June 14, 2010. (File photo: Xinhua)

The 6.5-km bikeway, including a 2.7-km overpass, will cut the commute time between Huilongguan, a densely-populated community, and Shangdi, where a large number of high-tech companies are located, from 40 minutes to about 26 minutes. An average of 11,600 people commute to work daily in the area.

A notice was issued by the Municipal Committee of Transport Wednesday to give guidance on how to use the bikeway.

According to the notice, the road only serves bikes with no assists, which means pedestrians, cars and electric bicycles are all banned. Riders should keep right and broken bikes should be walked and leave the bikeway via the nearest exit. Parking and riding in the wrong direction are also prohibited.

The maximum speed is 15 km per hour and if cargo is carried, it should be less than 1.5 meters tall from the ground, 15 centimeters wide and 30 centimeters long.

The notice will take effect on May 30 and any violation will be punished accordingly.