Beijing to open first 'energy park' where everything is solar powered 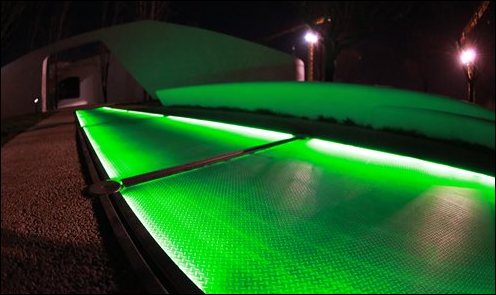 Thin-film solar panels are installed on the pavement at a park in Beijing. (Photo: Hanergy Holding Group)

From street lamps to rubbish cans, almost every facility will be powered by solar panels in an energy park in Beijing, where visitors can charge their electronic devices at a solar-powered umbrella.

Covering an area of four square meters, the park in Beijing's Haidian district uses solar collectors on the roof of buildings and its solar stations can charge four mobile phones simultaneously.

Dubbed the "G-Park Technology Park," it is expected to open next year.

Thin-film solar components will be installed on the roofs of building in the park and the pavement. The absorbed sunlight will illuminate the park at night. In winter, the road can heat up and melt the ice or snow, according to a statement sent by Hanergy Holding Group to the Global Times on Thursday.

The solar film is water proof and can bear 2 tons of weight at maximum.

The total installed solar energy capacity is 7,000 watts. In a year it can produce over 10,000 kilowatt of electricity. The energy saved by the solar panels is equivalent to planting more than 300 trees, a Beijing Daily report said citing staff from Beijing-based Hanergy Holding Group.

The park is jointly run by Chongqing-based Longfor Group, a property developer, and Hanergy Holding Group.

The park can also generate power from kinetic energy - when visitors step on the floor panels the downward pressure will produce electricity.

The intelligent system allows visitors to better interact with the park's facilities such as street lamps that light up when it senses a person passing by.