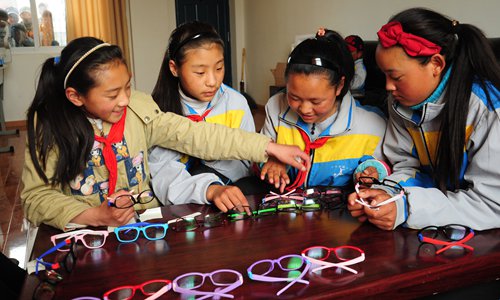 Beijing will conduct physical fitness tests on about 52,000 elementary and middle school students in the city from October 15 to November 8, and visual acuity will be counted as a "score" that will be collected and reported to the authorities for the first time.
The students were selected randomly based on the total number of primary and secondary school students in each district from an e-learning database, the Beijing Daily reported on Wednesday, citing a notice from the Beijing Municipal Education Commission.
The test sites will be chosen from schools that have a 400-meter running track, and students will conduct different tests based on their ages, the report said.
The test result for each student will be an important indicator in the student's comprehensive quality evaluation and academic level test, and higher education institutions will take the physical health test as an important basis for students' evaluation and graduation assessment, according to the report.
The commission's notice, however, didn't specify the criteria for the visual acuity test or give more information about it.
Many internet users expressed differing views about the notice. Some said it was a good way to control the growing myopia rate among youngsters, but others were concerned.
"It is unfair for the students whose myopia is hereditary," one netizen commented.
"The best way of cutting the myopia rate is to give students more time to do exercise outdoors," said another.
Cases of myopia among students in China are growing, increasingly affecting younger children, and short-sightedness is becoming the new norm for 45.7 percent of primary school students and 74.4 percent of junior high school students in China, according to media reports.
In 2018, China's Ministry of Education, the National Health Commission and six other departments jointly started a project to cut the myopia rate among 6-year-old children to 3 percent by 2030, according to the Xinhua News Agency.
The number of China's myopia patients in 2018 reached about 600 million, 40 percent of whom were primary school students, Xinhua said.