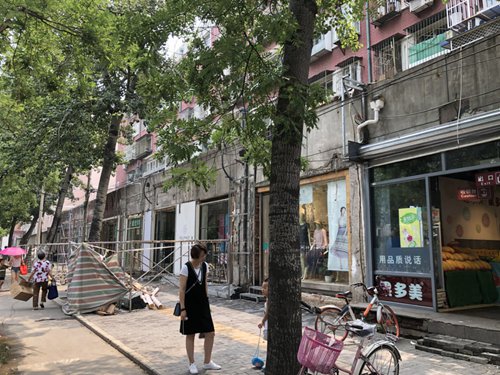 Old facades are being torn down on a street in Fengtai district, Beijing on Sunday. Liu Xuanzun/GT 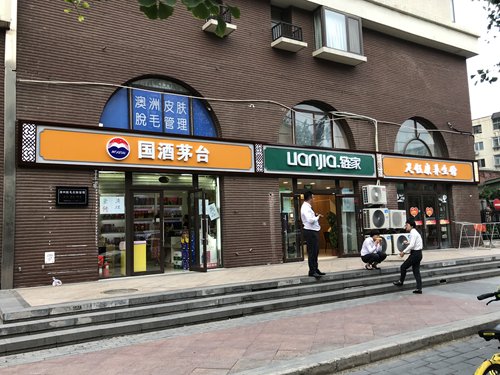 Beijing is launching a campaign to unify storefront facades in back streets and alleyways, a move that aims to improve Beijing's overall image, but has sparked discussions over whether unified facades would suppress the city's vitality and creativity.
A number of Beijing storefronts located in back streets and alleyways are replacing their old facades with new ones which have standardized fonts and sizes and are installed at the same height.
This is a campaign launched by the local sub-district office, a sales manager at a clothing store located in Dongtiejiangying sub-district, Beijing's Fengtai district, told the Global Times on Sunday.
"The construction is funded by the government, who asked for a unified renovation," he said.
More than 10 storefronts on Anlelin Street in Beijing's Fengtai district are currently undergoing renovation.
Other districts in central Beijing, including Chaoyang, Xicheng and Dongcheng, are launching similar campaigns, reported Beijing Youth Daily on Sunday.
According to the report, Xiaoguan sub-district in Chaoyang district changed facades for 98 storefronts in the past year, with 100 more expected this year. Xicheng district and Dongcheng district are also making efforts to make storefront facades more standardized.
"The goal of the campaign is to improve Beijing's overall image," an official at a sub-district office in Beijing, who asked not to be named, told the Global Times on Sunday.
The campaign first started in 2017, and has caught people's eyes recently, said the official, adding that many of the old facades were unapproved constructions and must be dismantled.
Similar renovations can be expected in more Beijing back streets and alleyways, according to the official, as no deadlines are set for when the campaign will conclude.
Although the new facades are generally standardized, storefronts are allowed creative modifications in terms of color and logo, the manager said.
"In the past, storefronts had all kinds of facades with different heights, sizes and colors. Some were not appealing to the eye," a Beijing resident surnamed Wang told the Global Times.
"But at the same time, I hope the new facades are not too dull so that storefronts become indistinguishable," noted Wang.
Now the stores are hoping that renovations can be completed sooner rather than later.
"It is taking too long to dismantle the old facade and install the new one. Customers are not coming in anymore because of the construction," the manager said.
Beijing conducted a citywide demolition campaign aimed at improving the capital skyline last year.
Outdoor advertising and noncompliant billboards that exceed height tolerances or extend beyond the edges of a building will be deemed illegal and removed, according to billboard management regulations in the capital city, which were released in September 2017 by Beijing Municipal Commission of City Management.
Thousands of illegal billboards have been torn down. The demolition process must be in tandem with standardization and reconstruction, so that Beijing can become a more pleasant place to live, according to the commission.