After almost seven months of suspended campus life, universities in China, with well-thought-out virus prevention measures, are set to reopen and welcome the new cohort of students, the latest sign of the country's achievement in tackling the COVID-19 pandemic. 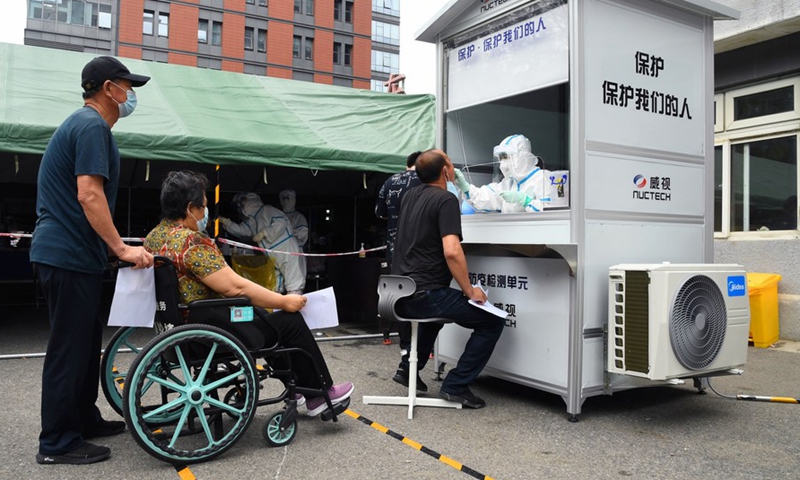 A medical worker collects a throat swab from a resident in a nucleic acid testing unit at a sampling site of Beijing Anzhen Hospital, Beijing, capital of China, June 24, 2020. (Xinhua/Ren Chao)

Universities in Beijing have informed students traveling from other provinces and regions that they must provide proof of a negative COVID-19 test in an effort to further safeguard the prevention work in China's capital city.

There have been no new cases of domestic transmission of COVID-19 in the Chinese mainland for seven consecutive days as of Sunday following sporadic resurgence of outbreaks in Beijing, Dalian and Northwest China's Xinjiang Uygur Autonomous Region since June.

"Every student from outside Beijing has to do a nucleic acid test," Song Laixin, deputy party secretary at the Beijing University of Chemical Technology, told the Beijing Daily on Sunday, noting that the requirement is because of the safety of the school and overall virus prevention.

Parents of students will not be allowed on campus, Song said.

If the students are unable to be tested in their hometown, they can return to Beijing with a health code and stay at the school's observation site. After receiving proof of a negative test, they can resume their normal campus life.

Military training, which freshmen participate in before they officially start university in China, can proceed normally this year as long as the prevention needs can be met, Li Yi, a senior education authority official in Beijing said Sunday.

University campuses will mostly be closed, with no unauthorized people allowed to enter, and students will be prohibited from going off-campus as much as possible, China News Service reported.

Li Yujia, a student at the University of International Business and Economics, received a notice on Sunday that she would have to undergo a test. Li, who has been in her hometown of Shanghai since January, said she would get tested four or five days before she returns to Beijing on September 5.

A senior student, Li is a bit worried about her internship, as the school campus could adopt closed-off management.  "I heard that we need to report to those in charge if we want to intern outside the campus… Maybe I should look for an internship after these conditions are lifted," she said.

"But my schoolmates and I all understand the necessity of doing the test," Li said.

A faculty member at a Beijing university told the Global Times on Sunday that the school has asked staff to avoid going outside Beijing.

Wu Han, a university student in Wuhan, Central China's Hubei Province, once hit the hardest by the coronavirus outbreak, said his school has put in place similar measures to those in Beijing, such as requiring students to get tested and restricting campus access.

"I feel pretty safe back on campus," Wu told the Global Times.

While students in Chinese universities are ready to go back to campus, reopening plan of most universities in the US are still pending with many still having to resort to online courses.  On Saturday, 44,600 new cases of COVID-19 were confirmed in the US.

"Every day in my school there are confirmed cases," a postgraduate student in Georgia, the US, told the Global Times. "I can't see when it will return to normal."