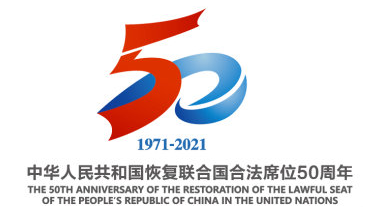 China has always upheld multilateralism and firmly safeguarded the United Nations system under international law, Chinese State Councilor and Foreign Minister Wang Yi said at an official event in Beijing to unveil a new emblem to celebrate the country's return to the global body half a century ago.

"In the 1950s, China first put forward and acted on the Five Principles of Peaceful Co-existence, a significant idea to establish and develop norms for international relations," Wang said.

The People's Republic of China rejoined the UN in 1971.

Beijing says it supports and defends peace and multilateralism and that it believes its international efforts have lived up to the resolutions adopted at the UN General Assembly.

For that historic moment, Pakistan Ambassador to China Moin Ul Haque said his country played a "humble and important" role in supporting Beijing, noting its neighbor has become an important voice for developing countries, cooperating with UN members to uphold the principles of the UN charter, and addressing challenges of humanity, such as climate change and the COVID-19 pandemic.

During its rotating presidency of the UNSC for May, China hosted more than 30 events. It's worked to ease recent tensions between Israel and Palestine, boosted global unity in the fight against COVID-19, and invested more in peacekeeping.

China is now the second-largest contributor of funds to both the UN and UN peacekeeping operations.

"We will always remember them. At this moment, more than 2,400 Chinese peacekeepers are performing their task globally, and 8,000 peacekeepers are on standby along with 300 police squads ready to go out to safeguard world peace," Wang noted.

Last year, in its position paper on the 75th anniversary of the UN, China emphasized the "need to work for a new model of international development partnership that is more equitable and balanced. It also highlighted the importance of cooperation between rich and developing countries, and among developing nations.

On UN's further reform, Beijing says the global governance system should adapt itself to evolving global political and economic dynamics, stressing more representation of developing countries for the shared aspiration of the overwhelming majority of countries.

"China will honestly act upon the major initiatives and will take a more active part in UN activities and work toward the UN's vision for the world in which nations beat swords into plowshares and enjoy lasting peace free from the scourge of war," Wang told a press conference during China's Two Sessions in March.