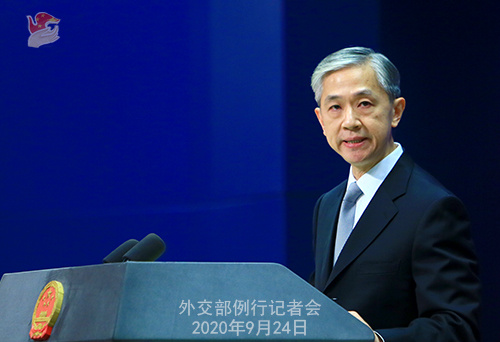 China resolutely opposes any act that uses the cover of academic activities to spread disinformation or to discredit or attack China, or that endangers the county's national security, the Foreign Ministry said on Thursday.

Ministry spokesman Wang Wenbin made the remark as two Australian academics were reportedly banned from entering China in accordance with the Exit and Entry Administration Law.

China has the sovereign right to bar any foreign national, Wang said at a daily news briefing. He added that China welcomes foreign nationals to study, work and live in China, tell China's story in an objective manner and enhance mutual understanding between China and the rest of the world.

Recently, Australia has repeatedly spoken and acted incorrectly on issues concerning China's core interests, such as sovereignty and territorial integrity, which is the main reason for current difficulties in bilateral ties, Wang said.

Australia also imposed unreasonable restrictions on normal bilateral exchanges and cooperation, damaging mutual trust between the countries, he said. Australians engaged in smearing China are urged to stop and to do more to enhance mutual understanding and trust, he added.

On Wednesday, Pompeo warned US politicians at state and local levels to be vigilant around Chinese diplomats, who he said could be trying to woo them as part of Beijing's "propaganda and espionage campaign", Reuters reported.

Wang expressed opposition to Pompeo's remarks, which he said are nothing but lies that disregard the facts. "Some politicians in the US have developed anti-China paranoia, repeatedly slandering normal activities of Chinese organizations and individuals in its territory, using the so-called claim of a China threat to obstruct normal Sino-US exchanges and cooperation for political self-interest," Wang said.

They will continue to be strongly condemned and opposed by clear-minded US people from all walks of life, he added.

Wang said China is not interested in and never interferes in the domestic affairs of the US.

Chinese diplomatic missions in the US and various associations have always acted in accordance with international law and bilateral agreements, he said, adding that their interactions with US governments at all levels are aimed at promoting mutual understanding, exchanges and cooperation, which are transparent and beyond reproach.

He urged Pompeo to respect the facts and stop creating lies about China.