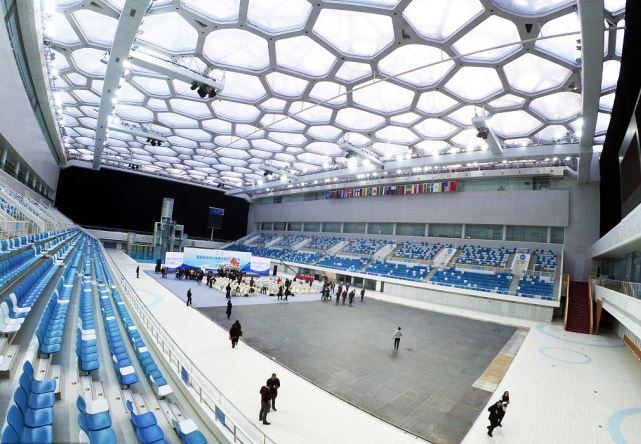 The iconic Water Cube that was used in the Beijing Summer Olympics is undergoing a dramatic transformation to the Ice Cube, and is set to host the curling events for the Beijing 2022 Winter Games. (Photo: VCG)

For the first time in Olympic history, the venues for the Beijing 2022 Winter Olympics and Paralympics will be powered by green electricity, Science and Technology Daily have reported.

A signing ceremony was held between the Beijing Organizing Committee for the 2022 Olympic and Paralympic Winter Games and the State Grid Corporation of China (SGCC) on Wednesday, confirming the deal.

Electrical work for the Beijing Winter Olympics has achieved set targets to this point, and the first batch of Winter Olympics venues in Beijing and Hebei province are now qualified to purchase green electricity.

The use of green electricity is a concrete measure to implement the concept of a green Olympics and fulfill the commitment of the bid, said Zhang Jiandong, vice-mayor of Beijing and executive vice-president of the Beijing 2022 organizing committee.

The move will promote the extensive use of green energy in Beijing, co-host city Zhangjiakou, and other cities, he said.

As green electricity trading agents, the State Grid will speed up the construction of a smart grid to ensure a safe, reliable and green power supply for the Beijing Winter Olympics, said Xin Bao’an, general manager of SGCC.