Beijing primary school students participated in various education activities to celebrate the 100th anniversary of the founding of the Communist Party of China (CPC) at a revolutionary memorial museum in the Fragrant Hills in Beijing, capital of China, on April 2, 2021. 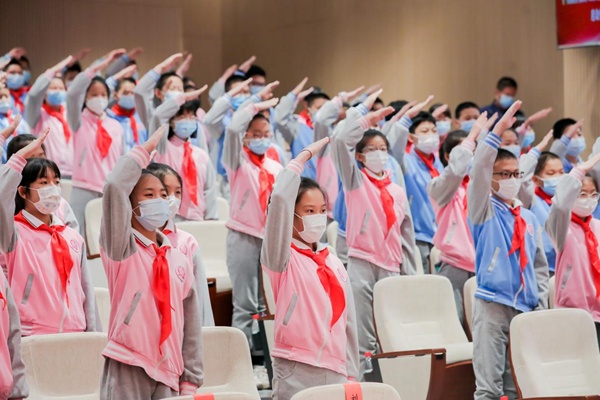 Over a hundred students from Beijing Haidian District No. 4 Experimental Primary School participate in education activities to celebrate the CPC's centenary at a revolutionary memorial museum in Beijing's Fragrant Hills on April 2, 2021. (Photo: China.org.cn)

Co-hosted by the Working Committee of Care for the Next Generations of Beijing and the China Soong Ching Ling Science and Culture Center for Young People, the education activities included visiting the revolutionary memorial museum in the Fragrant Hills, listening to the stories of revolutionary heroes, and hearing primary school student representatives discuss their takeaways from the event.

"While carrying out publicity and education among the general public on the history of the CPC, the country, reform and opening up, and socialist development, we have always given high priority to learning and education among adolescents," Wang Xiaohui, deputy head in charge of routine work of the Publicity Department of CPC Central Committee, said at a press conference held to shed light on the celebration activities for the 100th anniversary of the founding of the CPC on March 23.

The Revolutionary Memorial was chosen as a patriotic education center for the younger generations. It offers exhibitions presenting the history of the CPC Central Committee during its half-year headquarters at the Fragrant Hills in 1949. At that time, the Party led the Chinese People's War of Liberation to a countrywide victory.

During one of the sessions, Zhou Bingde, former vice president of China News Service and a niece of the first Chinese Premier Zhou Enlai, shared what the leading CPC figure taught the youngsters in the family: live by the philosophy of hard work and plain-living, be indifferent to fame and fortune, and choose careers that can serve the country. 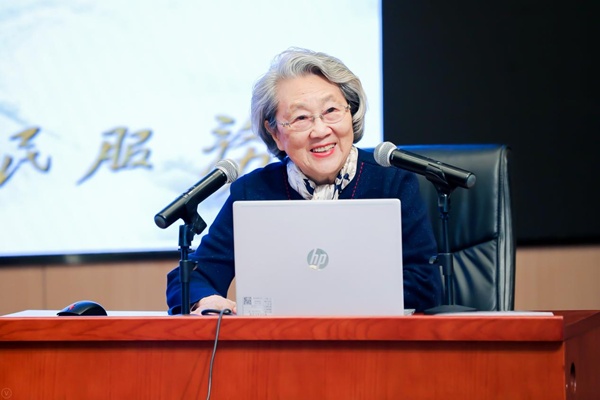 During the education activities held in Beijing, Zhou Bingde, former vice president of China News Service, shared with the students how her uncle Zhou Enlai, the first Chinese Premier and a leading figure in the CPC, educated the youngsters on April 2, 2021. (Photo: China.org.cn)

Shi Hongyi, a student representative from the Beijing Haidian District No. 4 Experimental Primary School, shared with his classmates what he learned from several visits to the revolutionary memorial.

He said that during his first visit, he was amazed at the statue of Chairman Mao Zedong and the two valuable red lanterns that had hung on the Tian'anmen Gate Tower at the ceremony declaring PRC's founding on Oct 1, 1949. Then through succeeding visits, he was able to gradually learn PRC's founding story through the museum's historical photos and cultural relics.

"The fighting spirit of the revolutionary heroes and Chinese communists is an inspiration to me," Shi said.

"I'm proud of being Chinese and a Young Pioneer under the leadership of the CPC! Meanwhile, I realize the responsibilities that I have to bear as a future builder of my motherland," he stressed.