CHINA Beijingers sweat it out during rehearsals for National Day parade

Beijingers sweat it out during rehearsals for National Day parade 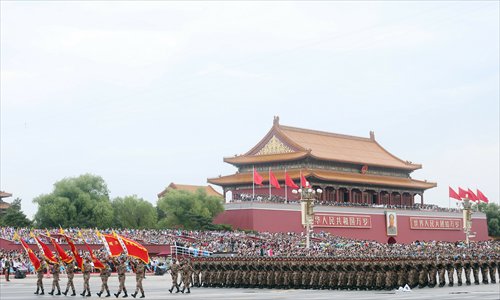 Thousands of Beijing's ordinary people have been preparing for months for the upcoming grand parade scheduled for October 1 in celebration of the 70th anniversary of the founding of the People's Republic of China.

Some 100,000 people who will take part in the parade have been practicing in their units and in larger groups at military parade training centers, multiple participants told the Global Times on Thursday.

Some 60,000 residents will also take part in evening celebrations on National Day.

Many of them are government workers or students. They started practicing for the big event since July, said participants.

"We practice two or three times a week, during the day near where we work. Now that we've learned what we're supposed to do, we have been taken to a location in the early mornings for more exercises since August," a participant who asked not to be named told the Global Times.

The first full dress rehearsal is scheduled from Saturday to Sunday at Tiananmen Square, news website chinanews.com reported on Monday.

Multiple other dress rehearsals will be held in September, the Global Times learned.

"Practices are certainly very tiring as they often take place at midnight. It takes a lot of time and stamina. The organizers even gave us adult diapers because we do not have time to

go to toilet during practice," a second participant said.  He will carry a flag and march alongside festooned vehicles, he said.

"We are very happy and proud to get this opportunity to celebrate our motherland's birthday in such a meaningful way. I believe it will all be worth it," said a participant, adding that everyone in his group is proud to represent their country in the parade.

The grand parade will also include a military parade, where some advanced domestically made weapons will debut.