The method has become a new formula for China's collaboration with developed economies under the Belt and Road initiative.

In June 2015, China and France put forward the idea of cooperating in third-party markets.

This new model of international cooperation aims to combine China's production capacity with advanced technologies from France in order to meet the high level of demand in developing countries.

China Harbour, together with France's Bollore Group and CMA-CGM shipping company, won a contract for a 25-year franchise of the container berths at the Kribi port in Cameroon.

When completed, the deep water port is expected to become the largest in the country.

China Harbour deputy manager Pan Qingjiang says the project has created good outcomes for all of the participants.

"This project combines the respective advantages of the three companies in port construction, trade, and logistics. It lays a foundation for further cooperation in the future. The project has also greatly contributed to the economic and social development of Cameroon. It provided the infrastructure and the necessary international trade and transportation hub for this whole area. It not only drives the development of the local economy, it also benefits the whole Guinea Gulf region and central Africa." 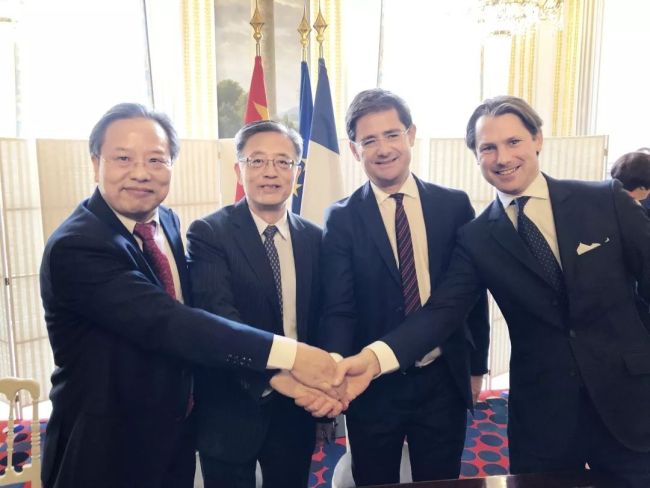 The presidents of Shanghai SUS Environment, China Investment Bank, France's Bpifrance and QUADRAN signed agreement on platform for sustainable energy development at the Elysee Palace in Paris on March 25, 2019. (Photo provided to China Plus)

SUS Environment owns patents for unique refuse burning technology, and has accumulated about a 40 percent share of the domestic market.

"Our French partners mainly build solar and wind energy facilities both inside and outside of France. We're combining their techniques with our plants that transform waste to energy, to form a combined project. Then we will talk to the governments that may need this kind of project."

China's Zoomlion Heavy Industry Corporation specializes in the manufacturing of high-tech equipment such as machinery used in the construction and agriculture sectors.

After the acquisition, Zoomlion teamed up with CIFA and started expanding their markets overseas.

He Song is the company deputy chief of international business. He says that third-party market cooperation now provides them with regular customers from around the world.

"We have made the Italian company accessible in the global network. We not only cover Europe, but also markets in North America, the Middle East, and in North Africa. At the same time we have extended its business into construction crane and tower crane equipment. This work has allowed us to extend our product chain and the expansion of our manufacturing base in the Middle East."

So far China has signed agreements on third-party market cooperation with France, Canada, Japan, Singapore, and Italy, along with some other international organizations.