CHONGQING, April 16 (Xinhua) -- Akos Kovacs is excited about a cooperation project he just wrapped up with a logistics company in southwest China's Chongqing Municipality. 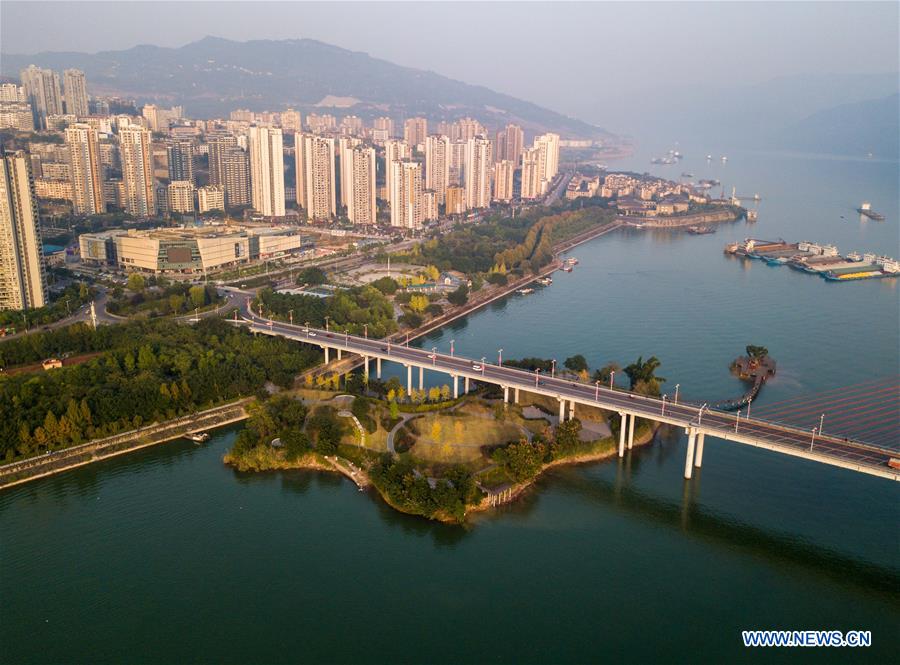 "I came to Chongqing because I plan to bring fresh agricultural products from my country and neighboring countries to China via the China-Europe freight trains," said the general manager of a Hungarian logistics company. "Not only that, I also want to bring my products to the eastern seaboard because of the unique location of Chongqing."

Chongqing is not only an important area along the Belt and Road, but also a central city in the upper reaches of the 6,300-km-long Yangtze, the world's third and China's longest river, Kovacs said, noting that products from his country can reach China's vast western inland via the China-Europe freight trains, while also extending to the eastern areas along the water route over the Yangtze.

"It is a huge market we are talking about," he said. "Costs will be lowered, and transportation time will be slashed."

The Belt and Road Initiative (BRI) is gaining steam, and coupled with the Yangtze River Economic Belt, more people will enjoy benefits.

An international Belt and Road forum will be held in Beijing later this month, with representatives from over 100 countries, including about 40 government leaders, having confirmed their attendance. The forum is expected to boost people-to-people connectivity among countries participating in the development of the Belt and Road.

Over the past few years, China has signed 171 cooperation documents on the Belt and Road Initiative with more than 150 countries and international organizations. Meanwhile, the Yangtze River Economic Belt has become a key strategy for China's regional development.

The Yangtze River Economic Belt covers 11 provinces and municipalities along the river, including Chongqing, and covers about 20 percent of China's total land area. The belt is home to about 600 million people, and economic aggregate there accounts for more than 40 percent of the country's total. The belt houses China's major manufacturing bases, financial centers, pilot free trade zones and huge markets.

Chongqing, as an important location of China's western development strategy, is situated on the "connecting point" of the Belt and Road and the Yangtze River Economic Belt, playing a unique role in China's regional development and opening up.

The city is not only connected to the eastern seaboard via the Yangtze and Europe via China-Europe freight trains, but it is also connected to Southeast Asia via Qinzhou, in south China's Guangxi Zhuang Autonomous Region. To the north, trains carry goods between the city and Russia.

In December last year, a China-Europe train carrying goods from Chongqing and other areas along the Yangtze departed for Germany's Duisburg. Not long ago, a China-Europe train transporting goods from Germany arrived in Chongqing's Guoyuan Port, where the goods were distributed to mega-cities along the lower reaches of the Yangtze, like Wuhan and Shanghai. More such trains are being mulled, authorities said.

In a bonded display and trading center in Chongqing, about 45,000 commodities from more than 40 countries along the Belt and Road, including Russia, Italy and France, can be found. The goods were transported to the city via China-Europe trains, by the Yangtze waterway or by air.

"Time-sensitive products like sea cucumbers and honey can be transported by the China-Europe trains, while products like sunflower seed oil can be carried by the slower yet more economical waterway," said Liu Xiaomin, who is in charge of the Russian pavilion at the center, referring to the combination of the various transportation means.

Akos Kovacs, the Hungarian businessman, said the Belt and Road Initiative and the Yangtze River Economic Belt will greatly help consume the excessive agricultural produce like apples in his country.

These days, more localities in China are cashing in on the synergistic effect of the Belt and Road Initiative and the Yangtze River Economic Belt to ramp up businesses. For instance, authorities in central China's Hubei Province are planning to build a hub to connect the Belt and Road and the middle reaches of the Yangtze.