Biden admin's plan to tie tariffs to Taiwan question 'ridiculous,' a useless card to be pl 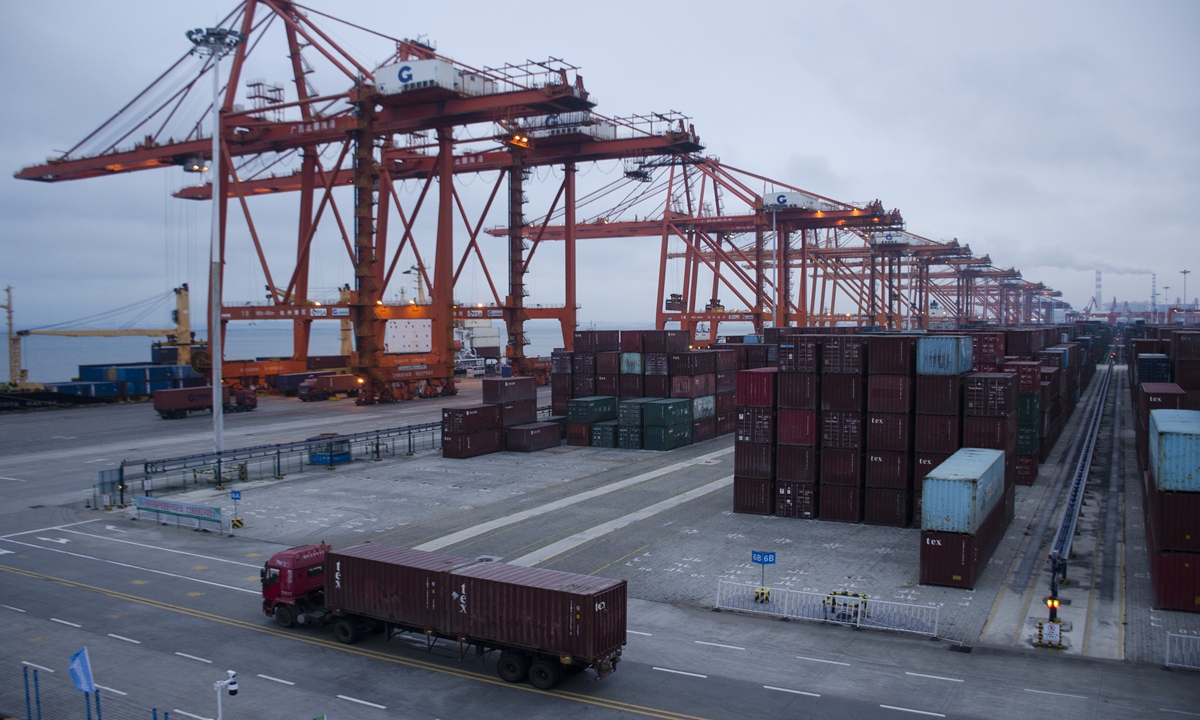 Photo taken on January 10, 2022 shows the container terminal of Qinzhou Port in Qinzhou, South China's Guangxi Zhuang Autonomous Region. Qinzhou vowed to build itself into a China-ASEAN trade and cooperation center and to be open to navigation to major ports in the world. (Photo: VCG)

Chinese experts said the Biden administration's reported plan to connect the Taiwan question and US tariffs on Chinese goods is "ridiculous," and delaying removing the punitive tariffs will continue to hurt the US economy.

A report of Reuters said the US is rethinking its steps on trade tariffs after the Chinese People's Liberation Army's (PLA) recent military drills circling the island of Taiwan, which were steps taken in response to US House Speaker Nancy Pelosi's provocative visit to the island last week.

The Biden administration previously said that it was considering cancelling some of the Trump-era tariffs on Chinese goods in the hope of helping address the country's surging inflationary pressure. The Reuters report said those options were being set aside "for now" and the opinion of the union, which is against rolling back tariffs may be an underlying factor in Biden's considerations. In an interview with Bloomberg TV on Wednesday, US Commerce Secretary Gina Raimondo said, "after Speaker Pelosi's visit to Taiwan, it's particularly complicated."

Chinese Foreign Ministry spokesperson Wang Wenbin said that the US shouldn't expect that China will trade its core interests and urged the US to immediately rectify its wrongdoings and return to the one-China principle and Three Sino-US Joint Communiqués.

China pointed out many times that there'll be no winner in a trade war, and unilateral tariffs imposed by the US will not be good for the US, China or the world, Wang said, adding that the US is an active provocateur and crisis-maker of the current tension across the Taiwan Straits.

A leverage doomed to fail

Chinese experts said the US, which ignited this round of tension in the first place, is now trying to use the tension as an excuse to exert pressure on China on economic issues, hoping for some leverage against China.

He Weiwen, an executive council member of the China Society for World Trade Organization Studies, told the Global Times on Thursday that the scheme, out of Washington's desperate political needs to counter China before mid-term elections, is ridiculous and doomed to failure.

China is willing to see the US remove all, not part of, the illicit tariffs imposed on Chinese goods, He said. "The burden of the tariffs is more keenly felt by the US side."

The US is facing record high inflation unseen in decades. Fresh data released on Wednesday showed that the US consumer price index, while falling from 40-year-high of 9.1 percent in June, still registered an 8.5 percent year-on-year growth in July.

China's July CPI, in contrast, stood only at 2.7 percent.

In addition to inflation, the US is also facing rising recession risks. The IMF in July cut the forecast for US GDP growth to 2.3 percent this year, compared with a June projection of 2.9 percent.

Hu Qimu, chief research fellow at the Sinosteel Economic Research Institute, told the Global Times on Thursday that the Reuters report suggested the Biden administration is determined to walk down a path of containing China with its discriminative trade policy, in its bid to win some votes during the upcoming US mid-term elections.

A Beijing-based expert on international relations, who preferred not to be named, used the word "tragedy" to describe the Biden administration's incapacity in handling China-US economic and trade relations.

"It could have used its tenure to reinvent China-US relations in a flexible and constructive way to benefit the US economy, the American people and the world. Instead, it continued to carry the burden left by the Trump administration and walked down the Trump path," the expert said, noting Biden's hands would be tied after the mid-term election, as the Republicans could seize control of one or both houses of Congress.

On Tuesday, US President Joe Biden signed the long debated "CHIPS Act" that seeks to revitalize the country's semiconductor industry. The law maliciously and blatantly seeks to crack down on China's chip industry through a series of administrative measures.

"Even faced with the highest inflation in the US, the Biden administration is hesitant to introduce measures to scrap the tariffs, which shows the unscrupulousness of the US government when it comes to China," said Hu.

The anonymous expert said the Biden administration is obstinate in ideological confrontation, Cold War mentality and bloc politics but is short of new ideas.

As the US introduced the CHIPS Act, the Biden administration would continue down the confrontational path on China under the guise of competition, the expert said.

He Weiwen predicted that the US will continue to push for supply chain decoupling, rope in its allies and use multilateral platform such as Indo-Pacific Economic Framework to execute its containment strategy against China.

Although its old cards have proved to be of not much use, it will cling to playing them, said the anonymous expert, noting that such moves are against the common interests of the majority of countries in the Asian-Pacific.

Hu predicted that the Biden administration would continue to play the tariff card, despite its ineffectiveness, by posturing to renew them when some tranches of tariffs expire at the end of September.

Experts said the continuously growing trade between China and the US, and China's widening surplus showed tariffs cannot prevent trade growth between the two countries.

China-US trade rose by 11.8 percent in yuan terms to 2.93 trillion yuan ($433 billion) in the first seven months of this year despite lingering tariff hikes and other restrictions, data released by Chinese customs showed on Sunday. China's trade surplus with the US widened by 21.7 percent to 1.57 trillion yuan.

In July, Chinese Foreign Ministry spokesperson Zhao Lijian said lifting all punitive tariffs imposed on Chinese goods would benefit both China and the US as well as the world as a whole.

The spokesperson said that removing all the tariffs as soon as possible would benefit American consumers and businesses, adding that a US think tank calculated that the removal of those tariffs would lead to a probable one percent reduction in US inflation.