Big drug busts for Guangdong in 2018 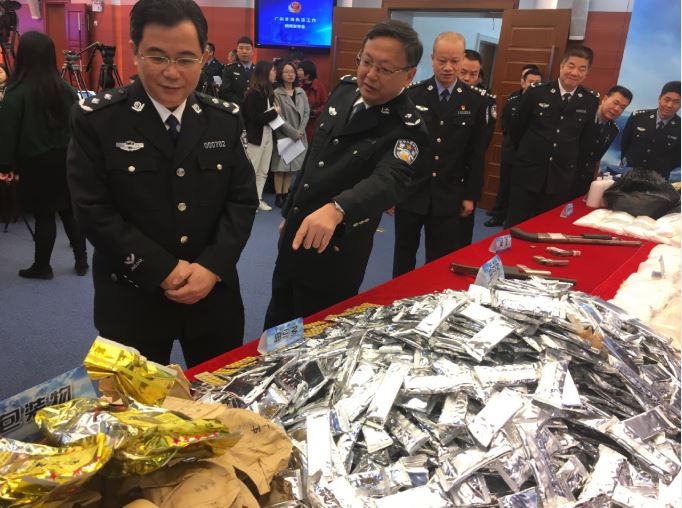 Upwards of 10 metric tons of drugs were confiscated in 14,000 cases from 2018, the Department of Public Security for South China's Guangdong province reported on Tuesday at a media briefing.

Over 18,000 suspects have been detained and some 90,000 drug addicts investigated from all the cases. As a result, a number of cross-border drug trafficking channels and distribution centers have been busted.

In spite of the achievement, drug enforcement officials with the department said the fight against drugs remains tough and a long-term challenge for the region, as traffickers have been relentlessly trying to build the province — a symbol of China's reform and opening-up policy — into a major distribution center.

For 2019, the department is planning to work with counterparts around the world to fight against drug use and related crimes, with cross-border drug trafficking and smuggling cases being the major priority.

In 2018, 141 cases involved 238 residents of China's Taiwan, Hong Kong and Macao. Over 3.5 metric tons were confiscated in those cases.

Deng Guangsheng, a senior drug police officer from the Shenzhen Bureau of Public Security, said by launching a special operation in collaboration with peers from Hong Kong in December they have seized 1.2 metric tons of chemical products likely to be used in the making of drugs, and detained two people suspected of involvement in criminal gangs in Hong Kong.

In Zhanjiang, western Guangdong, a major drug trafficking channel linked to Myanmar via Southwest China's Yunnan province was busted in October, with 13 suspected detained and 90 kilograms of meth confiscated.