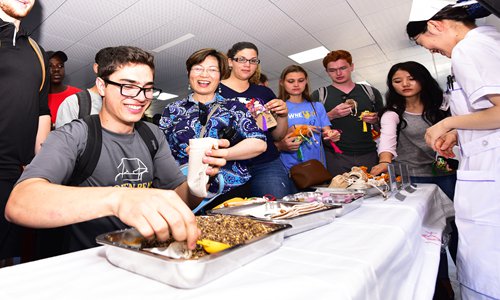 China has recently announced that it has marked more than 3 billion yuan ($469 million) to be spent on education of international students in the country in 2018, a rise of 16.8 percent from last year.
According to a detailed budget report published on the Ministry of Education (MOE) website on April 13, China has increased its allocation for international student education in the country to 3.32 billion yuan this year, 460 million yuan more than last year.
China has become a hub of international students, attracting larger numbers than any other Asian country in recent years, according to the People's Daily website people.cn. In the last two years, the number of international students in China has been growing 10 percent annually.
"It is natural for the budget to go up as the country becomes more attractive to international students," said Xiong Kunxin, a former professor at Beijing's Minzu University of China.
Such a decent budget outlay shows the country's determination to enhance its soft power, and that will pay off in the long run, Xiong told the Global Times on Tuesday.
"When you go back to your country after studying and living in China, you are not the same and can inspire others to come for a visit, to invest in a business or to start studying Chinese like we did before," Lola, a Colombian who completed her Master's in applied linguistics at the Beijing Foreign Studies University last year, told the Global Times on Monday.
"I and my classmates are always thinking about ways to bring our home countries and China closer in terms of languages and cultures. The scholarship by no me ans forces us to do so, it comes naturally after you learn about China so well," Lola said.
Lola had a Confucian Institute scholarship that provided her a shared dorm on campus and a monthly stipend of 3,000 yuan. A HSK 5 level Chinese proficiency was a must for her Master's.
The time students spend in China, even for a short exchange stay, becomes a lifetime treasure, Xiong said, adding that when more such students return home with better understanding of the host country's culture and society, a more authentic China emerges before the world.
Large footprint
In 2017, there were 489,200 students from 204 countries and regions in Chinese universities and only 11.97 percent of them were sponsored by Chinese Government scholarship.
More than 430,000 of the students were self-funded, accounting for nearly 90 percent of the total, people.cn reported on April 2.
A total of 289 universities are allowed to enroll international students with Government scholarship and offer a variety of programs in science, engineering, agriculture, medicine, economics, legal studies, management, history, literature, philosophy, and fine arts at all levels, according to the China Scholarship Council (CSC).
Full scholarship covers education, administration cost and expenditure to support student activities, and could go up to 66,200 yuan, 79,200 yuan, and 99,800 yuan for undergraduates, Master's and doctoral students respectively, according to the CSC.
The amount of scholarship is determined by the discipline - Field of Study I includes philosophy, economics, legal studies, education, literature (except fine arts), history, and management; Field of Study II includes science, engineering, and agriculture; Field of Study III has fine arts and medicine.
Those majoring in Study III can receive more than students of other subjects.
The process of awarding government scholarships is strict. Those who don't meet the standards "will stop receiving funds," a Ministry of Education official was quoted by thepaper.cn as saying on May 29.
Among the Government scholarship students in 2017, a total of 40,800 were undergoing their Master's and doctorate, accounting for 69.75 percent of the total, a rise of 20 percent over 2016.