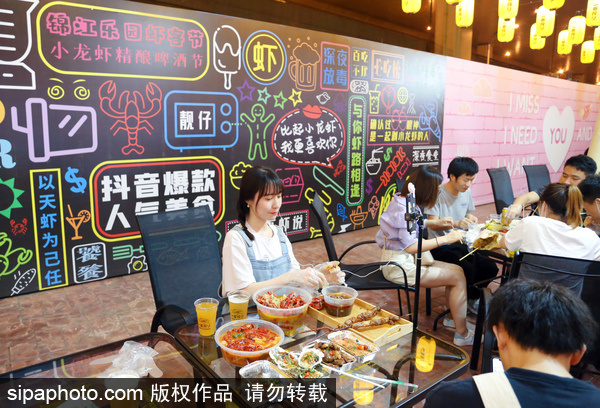 Mukbanger eats crayfish while live streaming on their mobile phones to "share the delicacy" with netizens via Douyin. (Photo: Sipa)

On Chinese short-video platform Douyin, a catchline of "say no to food waste, eat smart, live healthy" will appear at the top of the search results upon punching in keywords like "big eater" or "mukbang."

"The behavior of some food vloggers entails serious wastage of food." Following this comment by China's state broadcaster CCTV earlier this week, many short-video and live-streaming platforms have beefed up scrutiny over related content as part of an effort to curb food wastage.

"Those who are found wasting food will be penalized by the platform in accordance with the degree of violations," said Douyin in a statement.

Another live-streaming platform Kuaishou shows a prompt of "reject waste and eat healthy," laying out specific requirements for food vloggers such as using proper utensils and not eating or drinking excessively. The platform will crack down on any content comprising fake eating and vomiting, it said in a statement.

China has launched an "empty plate" campaign since 2013. Though the situation of "waste at the tip of the tongue" has been improved, it still exists and signals a resurgence in recent years.

Akin to eating 36 sticky rice dumplings in 15 minutes or 6.5 kg ramen noodles in one meal, as a popular form of online live-streaming, some hosts tend to challenge food in large quantities to attract more viewers.

Among the 394,500 videos hashtagged "eating show" on Douyin, the total views reached 28.8 billion.

Stressing that over-eating may lead to obesity or acute gastric dilation, Wei Hongtao, a physician at the Beijing Friendship Hospital said such gluttony videos will not only bring irreversible harm to the anchors but also mislead the audience.

The latest move has gained support from people online. "Wasting food is shameful, and the more food we save, the fewer people would go hungry," said a Weibo user.

"Those eating videos make me feel really bad. I actually prefer to watch how people cook local delicacies so that I can learn some cooking skills," another user said.