The birthrate on the Chinese mainland reached a record low last year, figures released by the National Bureau of Statistics on Friday showed. 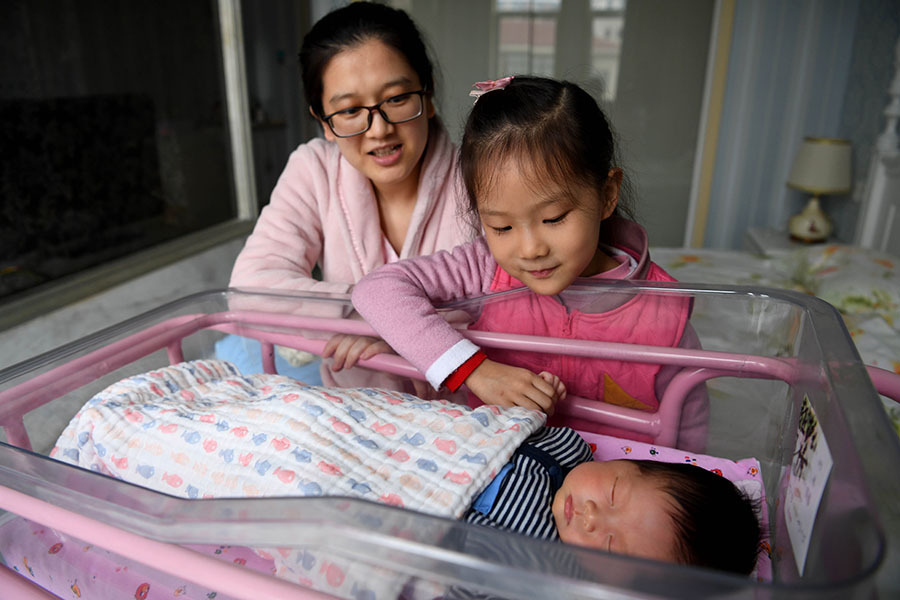 A mother and her daughter watch over the family's newborn baby at an infant healthcare center in Hefei, Anhui province. (Photo: Xinhua)

The total number of babies born last year was 14.65 million, a decrease of 580,000 from the previous year, while the birthrate stood at 10.48 per 1,000 population－the lowest over the past seven decades, according to the bureau.

Meanwhile, total population on the mainland narrowly exceeded 1.4 billion by the end of last year, an increase of 4.7 million year-on-year.

Last year marked the third consecutive year of falling births on the mainland despite the universal second-child policy having been adopted at the beginning of 2016.

The policy, which encourages all couples to have two children, was designed to boost births to cope with rapid population aging.

Ning Jizhe, head of the NBS, said at a news conference on Friday that despite the decrease, the total number of births last year on the mainland was still very big, and the universal second-child policy has played a very important role in encouraging births.

"Of all babies born last year, 59.5 percent were the second or more child, with the percentage rising over the past few years," Ning said.

The percentage has remained at about 50 percent since the universal second-child policy was enacted, according to the National Health Commission.

Despite the policy, many couples in China were not willing to have a second baby, for reasons such as the high cost of raising children and a lack of nursery facilities, according to a survey organized by the commission.

Before the latest figures were released on Friday, many population experts had predicted a continued fall in births last year and in the years ahead, due to a lack of willingness to give birth among couples and a dwindling number of women of childbearing age.

China will conduct the seventh national population census this year, which will provide authorities with better knowledge of China's population, including its structure and distribution, so it can provide a scientific basis for formulating the next five-year national development plan, Ning said.