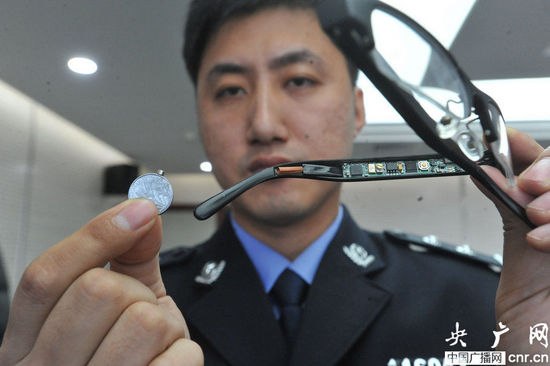 A recent undercover investigation busted an underground test cheating ring in Beijing’s Fangshan District. Investigators arrested the ringleader, a man surnamed Li, along with 10 accomplices, in a classroom where they were training 30 people on how to use a variety of electronic cheating devices, reported by Xinhua.

Dong Jie, a Fangshan criminal investigator, said the cheating industry thrives because the perpetrators who specialize in this area of crime are well-organized. The gangs find their customers on social media platforms like WeChat where they advertise their services. Once payment is received, the outfit provides equipment and training. Later, through their underground network, the criminals obtain the desired exam and deliver the answers to their clients.

As Li explained in court, at the beginning of the exam, one of his accomplices Guo had another gang member, a man surnamed Ding, point a mini-camera at the test questions so he could send the images to him while he waited in a nearby restroom.

However, due to Wifi signal blockers, the images could not be transmitted. Guo tried to exit the test room with the memory card containing the exam questions, so he could hand if off to Su. It was at this moment public security officials nabbed the criminals

Eventually, Fangshan Court authorities announced the verdicts for all 10 defendants as they received prison sentences ranging from nine to 30 months for organized cheating and illegally selling exams.

The prosecutor for the People’s Procuratorate of Tongzhou District, Liu Yan, told a reporter that the cheating operation follows an underground chain. The steps include online recruitment, submitting payment, acquiring the exam questions, answering the questions, and then delivering the answers to the clients. The gang in question broke from the typical protocol in illegal examination activities.

The device, known simply as an “eraser” looks like an ordinary rubber eraser, but on the other side is a monitor that can clearly display test answers. Those who organize the cheating for an exam deliver the answers from outside of the exam room where Wifi shield signals are weak.

Another device, which looks like a colorful “scarf” is very soft, but it also has a monitor sewn into it. The person taking the test wraps it around their neck. Without closer inspection it’s difficult to find, and during the colder months it’s much easier to hide.

A micro wireless earphone about the size of a soy bean is another popular cheating device.  Once hidden in the ear, it too is hard to discover. Rice-like earphones are smaller and more advanced. However, it has been reported that a few people have had to go to a doctor to have them removed because they can easily get stuck.

The economic gain within the underground cheating market and how interests are divided is also an intricate web. Liu explained, “the cheating candidates are required to pay different fees ranging from 15,000 yuan to 60,000 yuan. If the candidate needs the answers desperately, they will be charged more, even 100,000 yuan.”

In this recent case, there were over 20 cheating suspects. However, the clients in this case were charged 18,000 yuan each, with most of the money going directly to Li.  For example, it was Li who designated Su to deliver the exam questions who was only paid 7,000 yuan.

The criminal experts believe that strengthening supervision and tracing underground chains is crucial. In addition, relevant departments should inspect testing rooms beforehand and issue cheating penalties so a harmonious order can be created when giving an exam.