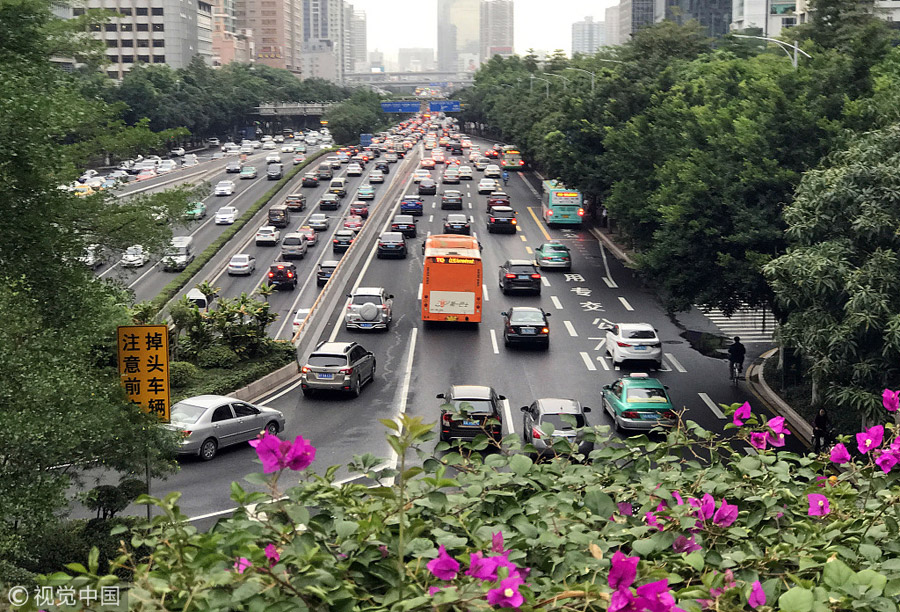 China intends to implement its strictest vehicle emissions regulation yet to further reduce air pollution, the Ministry of Ecology and Environment said in a report released on Friday.

The ministry will expand supervision over the quality of diesel products and diesel engines and increase the use of rail transportation in freight services to cut back air pollution, the report said.

Emissions from diesel trucks, which make up only 7.8 percent of automotive vehicles in China, account for 57.3 percent of nitrogen oxide and 77.8 percent of particulate matter in the country's air, two major polluters, according to the report.

Automotive vehicles have emerged as a major source of China's air pollution, it said.

As of 2017, China had been the largest vehicle producer and buyer in the world for the nine consecutive years, with 310 million automotive vehicles on its roads at the end of last year, up 5.1 percent from the previous year.

These vehicles emitted about 43.59 million metric tons of pollutants, down 2.5 percent year-on-year, the report showed.

Yin Hang, head of the Policy Research Department of the ministry's Vehicle Emission Control Center, said China has phased out more than 20 million outdated diesel vehicles in the past five years.

The country should further supervise production, use and elimination of automotive vehicles to reduce air pollution, Yin said at a recent forum on air pollution control.

In 2017, ports in Tianjin and Shandong province banned the use of diesel trucks to transport coal in the Bohai Sea area to improve air quality.

An analysis of air pollutants in 15 major Chinese cities showed that local mobile emitters, a category that includes vehicles, contributed about 13.5 percent to 41 percent of fine particulate matter, according to the ministry.

Beijing has made addressing motor vehicle emissions a focus of this year's air pollution control work.

High-emissions vehicles will be taken off the roads in the capital to help control smog－extending the ban on such vehicles within Beijing's Sixth Ring Road－said Mayor Chen Jining at the opening of the first session of the 15th Beijing People's Congress in January.

Liu Bingjiang, head of air quality management at the ministry, said, "Targeting motor vehicle exhaust emissions is a precise treatment for Beijing's smoggy weather, because studies have found they are the top source of the city's major air pollutants."

The factors causing Beijing's air pollution have changed dramatically, with coal-burning now accounting for less than 10 percent of the city's energy, and over 80 percent of Beijing's industries now in the service sector, Liu said at a news conference.