By Xie Jun and Zhou Zheng in Boao | Global Times

China will roll out a basket of measures to boost opening-up this year, including further reducing the negative list for foreign investment and raising penalties on copyright infringement, Premier Li Keqiang said at the opening plenary of the 2019 Boao Forum for Asia (BFA). 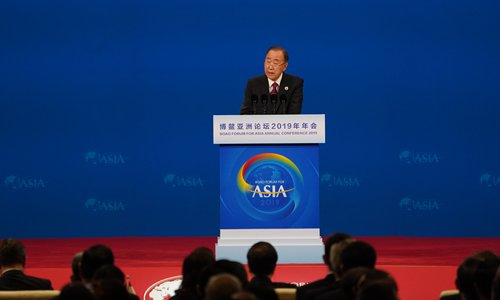 Ban Ki-moon, chairman of the Boao Forum for Asia (BFA) and former United Nations Secretary General, speaks at the opening plenary of the 2019 BFA on Thursday. (Photo: VCG)

The opening plenary was held Thursday morning in the coastal town of Boao in South China's Hainan Province. The 2019 BFA runs from Tuesday to Friday with the theme, "Shared future, concerted action, common development."

In his speech, Li reiterated calls to safeguard the rule-based multilateral trading system and seek cooperation. No country is immune from challenges such as downward pressure in the global economy, Li said, stressing that China advocates free and fair trade.

Experts, multinational company executives and government officials echoed Li's call for further opening-up and globalization, providing recommendations at sub-forums on how to tackle the rising uncertainties stemming from the de-globalization trend.

"After many similar statements by various [Chinese] officials [on opening-up], Li's speech highlights the strong priority being given to opening-up, reform and foreign investment-friendly policies as a way to support China's growth," Denis Depoux, CEO of Roland Berger Greater China, told the Global Times.

Leif Johansson, chairman of the AstraZeneca, also said that China's determination to further open up reflected in Li's Boao speech is "quite encouraging."

"China has now become one of the most appealing countries [for us] to invest in," he told the Global Times.

"An open economy is always going to be more prosperous. I don't think anyone really doubts that," James Stone, former chairman of the US Commodity Futures Trading Commission, told the Global Times, adding that it is clear China has become a major factor in the world economy. He also shares a positive view of China's long-term economic growth. "If you measure it in real terms rather than percentages, I think China is in a strong position to continue to grow," he said.

Ban Ki-moon, chairman of the BFA and the former United Nations Secretary General, vowed strong support for globalization and free trade at the opening plenary. "We are on the same planet, same boat with a shared future…I hope the forum can bring the broadest consensus and become policies to benefit Asia," he said.

The supporting rules will take effect together with the law on January 1, 2020, he said.

"This is very meaningful, as many foreign enterprises are in favor of this new law, while still having expectations as to how it would be implemented and enforced, particularly in the case of intellectual property rights or forced transfer of technologies." Depoux said.

On a draft amendment to the patent law submitted for top legislature review in December 2018, Li said that the amendment would increase the compensation for patent infringement. He also said that China will further relax controls on market access and shorten the negative list for foreign investment by the end of June.

Li pointed out China will continue to further open up its financial sector.

China will open up its bond market and make it easier for overseas investors to trade the country's bonds, said the premier.

Daniel Starta, managing director and partner of A.T. Kearney Greater China, said that those areas are likely to be the next areas of strong growth for China, and therefore China hopes to facilitate that wave of growth by encouraging capital in those areas.

"I think the level of [Chinese] anticipation of investment coming in also sends a good message to the world that China is not going to 'follow the script' of trade protectionism," he told the Global Times.

Along with China's determination to open up, it has also been leading efforts in international cross-border cooperation, such as expanding Belt and Road Initiative (BRI) projects, in the face of rising protectionism.

Li said China will push the BRI's strategic connection with other countries, as well as push for regional integration.

Positive signs of such cooperation have emerged, with Italy becoming the first G7 country to sign up to the initiative.

Zhang Yansheng, a research fellow at the China Center for International Economic Exchanges, told the Global Times that as de-globalization deepens, emerging markets represented by those along the BRI routes provide an appropriate platform for Chinese companies' business expansion as they are free from great power political conflicts.