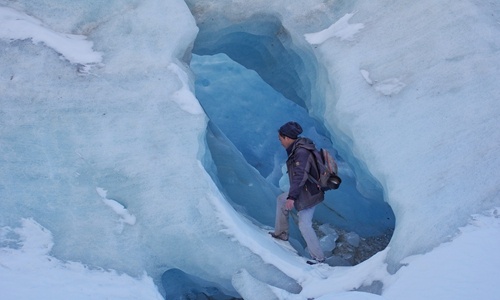 Local authorities in Tibet said they have found a dead body downstream of a glacier waterfall which is suspected to be that of Wang Xiangjun, the famous Chinese adventurer who had been missing since December.

The public security bureau of Lhari County in Southwest China's Tibet Autonomous Region published an announcement on Tuesday, informing the public that they have found a body downstream of a glacier waterfall, which is suspected to be that of previously missing Wang Xiangjun after a preliminary investigation.

Wang, 30, had photographed over 70 glaciers in Southwest China since 2013, and gained over 3 million followers on short video platform Douyin through videos of his adventures, earning him the nicknames "Glacier Bro" and "Tibet Adventure King."

Wang went missing after falling into a glacier waterfall in December, according to previous media reports. The local police and emergency departments have since organized more 200 professional personnel to search for him at the spot he went missing and downstream of the waterfall. Months went by they found no trace of him.

Some of Wang's fans believed that the fact that he had not been found meant that he might be out of danger. However, after analyzing the last video Wang posted, others believed that he may have been killed by his companions before falling into the glacier waterfall. This claim was later dismissed by the police, but multiple rumors about his disappearance have been widely discussed online.

These rumors were gradually dispelled after the public security bureau of Lhari County issued the announcement. "On Sunday, people downstream of the glacier waterfall fall found a body beneath the ice and reported it to the Bureau while conducting inspections in accordance with government deployment. Professionals then arrived and recovered a male body."

"After a preliminary investigation, the deceased is suspected to be Wang Xiangjun, who previously fell into the water," read the announcement from the Public Security Bureau, "At present, further identity confirmation is being carried out in accordance with legal procedures."

After the news was made public, a number of netizens took to social media to express their condolences and their reverence for his adventurous spirit.

"He stayed forever in the glacier he loved, but his spirit deserves to be carried on," one netizen wrote on China's Twitter-like social networking platform Sina Weibo, "May he always be a happy adventurer."

Wang said in his speech at the 25th United Nations Climate Change Conference in 2019 that his mission is to help raise awareness about global warming in China and the world through photographing glaciers.