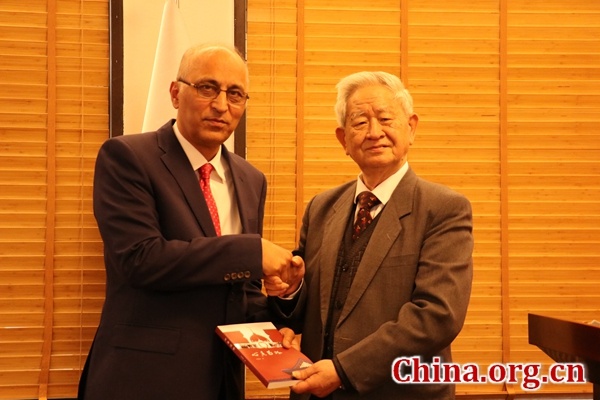 Moin ul Haque (L), the ambassador of Pakistan to China, and Lu Shulun (R), former Chinese ambassador to Pakistan and author of the book "Garlands of Love," shake hands during the book's launching ceremony at the Embassy of Pakistan in Beijing on April 12, 2021. (Photo: China.org.cn)

A book entitled "Garlands of Love" was released on Monday at the Embassy of Pakistan in Beijing, marking one of a series of events to be held this year to celebrate the 70th anniversary of diplomatic relations between China and Pakistan.

The book, written by Lu Shulin, who served as Chinese ambassador to Pakistan between January 1999 and April 2002, is a collection of Chinese anecdotal poems concerning the two countries' diplomatic activities. It also includes figures who helped cement the ironclad friendship between the two sides and showcases Pakistan's unique features in geography, history, and culture.

The 82-year-old was also among one of the first Chinese scholars to study English and Urdu, the national language of Pakistan, upon the founding of the People's Republic of China in 1949.

As well as a review of the author's work and experiences from over two decades ago, the book also seeks to offer China's younger generation a glimpse of the time-honored history of the China-Pakistan friendship, said Lu during the book's launch ceremony in Beijing on April 12.

Moin ul Haque, the ambassador of Pakistan to China, spoke highly of the book and the passions underlying the "iron brotherhood" of China and Pakistan. He reinforced the five pillars upon which China-Pakistan diplomatic relations have long been built, which are mutual respect, trust, understanding, support, and cooperation. 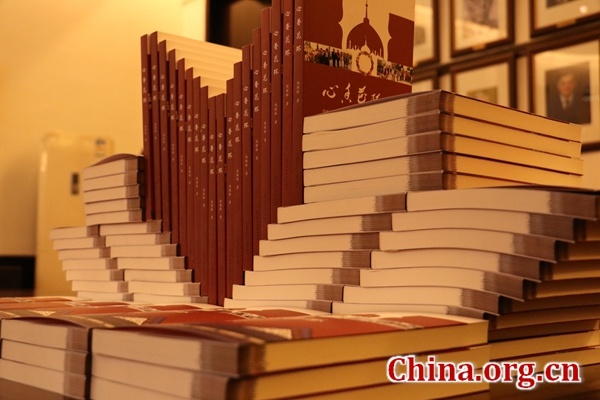 The book "Garlands of Love" is released on April 12, 2021, at the Embassy of Pakistan in Beijing. (Photo: China.org.cn)

The well-established diplomatic ties between the two countries have helped foster numerous major collaborative economic projects over the years. Last December, the China-Pakistan Economic Corridor (CPEC) projects, a flagship of the Belt and Road Initiative, moved into their second phase as scheduled despite the global economic setback due to COVID-19.

Last week, the two countries also renewed their pledges to safeguard the vital role of the UN, support multilateralism, the use of political and peaceful means to resolve global and regional issues, strengthen cooperation on anti-terrorism, and consolidate strategic coordination on human rights issues.