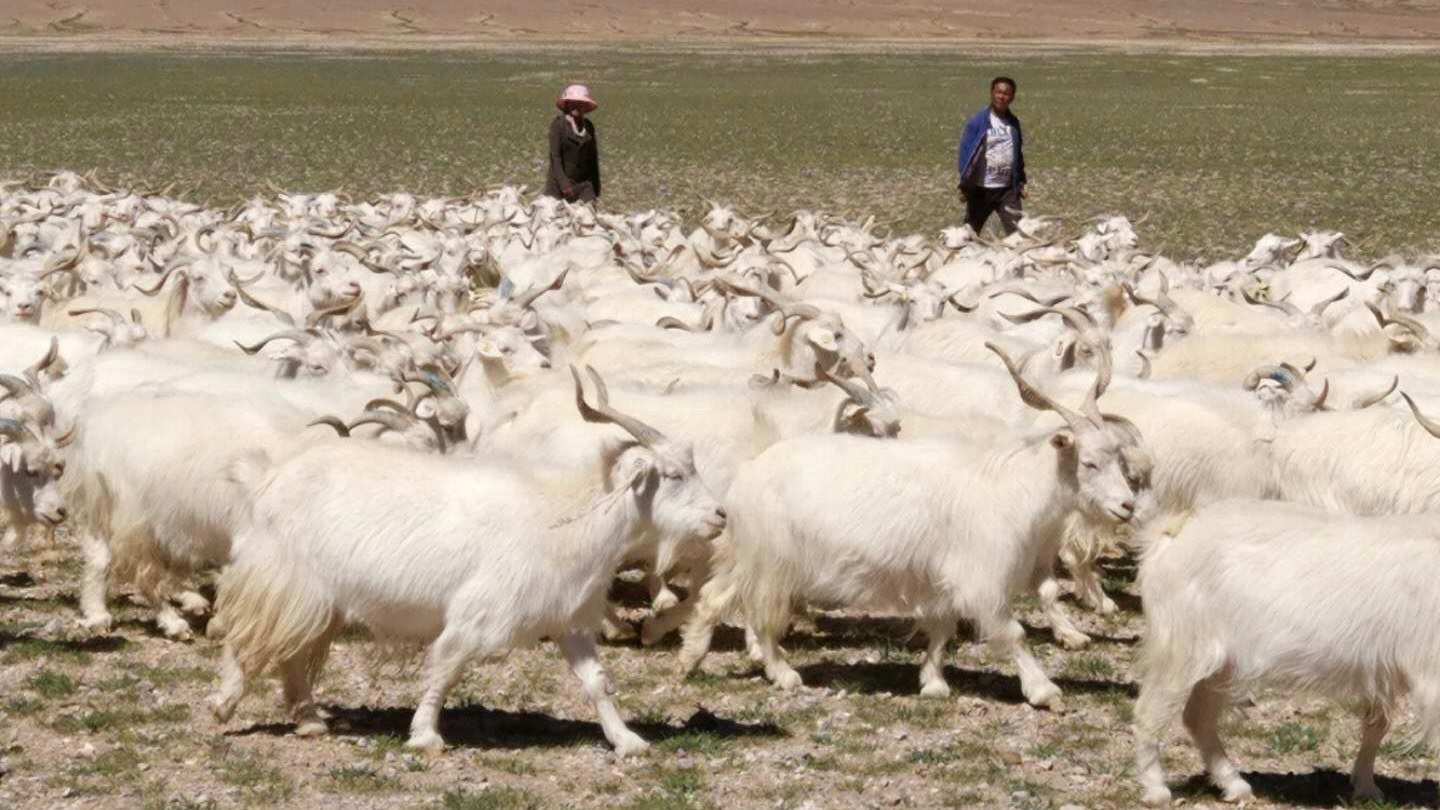 Cashmere. The mere name evokes luxuriously soft knitwear. But it comes at a price: a cashmere sweater from a luxury brand can easily fetch 2,000 US dollars, far more than your average wool jumper.

CGTN Digital visited a goat breeding center in the far west of China's Tibet Autonomous Region and found out more about where this wool comes from, as well as efforts to boost its quality and help local farmers improve their stock.

Rutog County is so far to the west of China that it is closer to Iran, Kazakhstan, even Turkey, than Beijing: a three- to four-day drive from the regional capital Lhasa.

But here, among the arid landscape at 4,000 meters' altitude, live some of the prized goats that produce the cashmere wool so valued around the world.

Small, with long white hair and curling horns, the goats graze under the watchful eyes of a handful of shepherds under the scorching August sun.

Behind this peaceful picture, however, there is a good deal of research and planning.

The Rutog County Goat Breeding Station, set up in 1997, has been working to improve the quality of the local livestock, using high-tech equipment to test the goats' hair and determine which ones provide the finest.

The best performers are then lent to local farmers free of charge to mate with their own female goats, Dun Dan, one of the breeding station's technicians, told CGTN Digital.

The station, which is government-funded, also provides professional training for farmers, to teach them how to breed goats in a way that will produce the best cashmere, according to Suolang Ciren, deputy director of the Rutog County animal husbandry department.

Already, goats have been lent to 517 households, and this has helped improve yields: these households now produce on average 253.1 grams of fine cashmere wool per goat per year, 90 grams more than others, the breeding station proudly states.

Cashmere goats are indigenous to Rutog County, and locals make sure the stock is kept pure, neither sending them abroad nor bringing others in from outside.

In total, the county has over 200,660 pure white cashmere goats - far more than it has people.

Looking after the animals is relatively straightforward: The goats only need grass, water and a shelter for the night, says 28-year-old Dan Zhen Qu Pei, one of the eight shepherds looking after the breeding station's 960 goats - 220 males and 740 females.

Things, however, get busy in March when the female goats give birth. The shepherds are also the ones who collect the cashmere in August, a time-consuming task that is done by hand.

The finest cashmere wool comes from the side of the goat's belly and is collected by combing through the animal's fur with a very fine comb.

The best cashmere is shiny white in color, with fibers that are three to five centimeters long and just 11.1 microns thick, or about one-hundredth of a millimeter.

Both male and female goats produce this precious wool, and the best quality is obtained when they are between three and five years old.

According to Suolang, the breeding station used to sell 500 grams of unprocessed cashmere to a local mill for just 100 yuan (14.6 US dollars). Now, having improved the quality of its product, it gets 200 yuan for the same amount.

Once processed and knitted into sweaters, scarves or coats, the cashmere from Rutog County is exported abroad.

China has long been the world's number-one producer of cashmere, accounting for up to 70 percent of the global production.

Although remote and little known to the outside world, Rutog County nevertheless plays a role in this worldwide success.