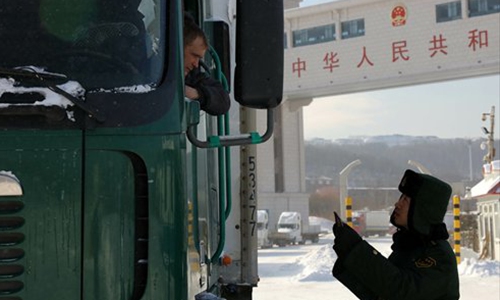 A security officer checks a truck at the border checkpoint in Suifenhe in Northeast China's Heilongjiang Province.(Photo: IC)

China's border entry ports that have been shut will remain closed, China's immigration authority said on Monday, as the pressure from epidemic prevention and control from neighboring countries continues to rise.

The land border ports that have been closed since the outbreak will continue to be closed, and seasonal ports will postpone their date of opening. Passage routes in border ports will be restricted and only retain freight transportation functions, Liu Haitao, a senior official with the National Immigration Administration, said Monday.

China will minimize border crossing and prohibit entry and exit of people from third countries at border ports, the immigration official said.

China is strictly controlling the issuance of entry-exit certificates in border areas, and also restricting non-essential entry-exit activities such as tourism and visits to relatives and friends. The number of people coming from border areas on both sides has dropped significantly, falling by nearly 90 percent.

On Monday, the National Health Commission reported 108 newly confirmed patients, 98 of whom were imported cases.

As of Monday, a total of 253 Chinese nationals who returned to Northeast China's Heilongjiang Province from Russia via the Moscow-Vladivostok-Suifenhe route were confirmed to have COVID-19.

Police in border areas will boost their patrol capability, strictly cracking down on illegal border crossing, smuggling and drug trafficking.

Residents in border regions will be given legal knowledge and encouraged to report illegal border crossing activities.

At the same time, China will strengthen its cooperation on law enforcement with neighboring countries.